Sure Deadpool and Bane covered the infectious pop-hit of the moment, PSY's Gangnam Style, but would Wolverine, the former cigar smokin', still currently beer drinkin', smart-mouthed, attitude ridden, mucho man he is ever step foot into the same arena?

Seems he has. For not only when PSY visited the set of the upcoming movie Wolverine, did actor Hugh Jackman show off his dancing moves - even giving PSY his own set of claws to Gangnam with. 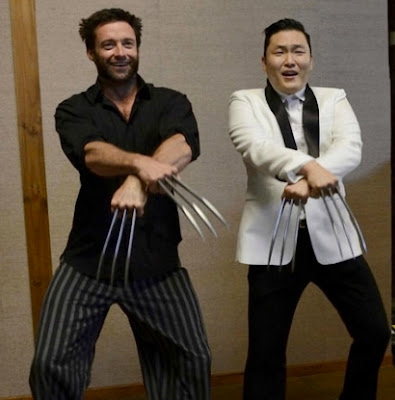 Believe it folks, it's fresh from PSY's own Twitter, no photoshop required. While ladies mourn PSY dancing with their favourite Canadian mutant in their place, I just hope the directors aren't thinking PSY would make a great pop-colour powered Jubilee! After the last Wolverine film, you just cant be too sure...
Posted by IADW at 6:00 pm