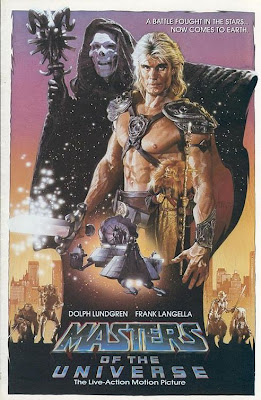 In the late 80's it seemed every movie saviour was a leather jacket wearing kid with a knack for playing the keyboard and wearing ripped jeans. Not only would such a kid get to smooch a pre F.R.I.E.N.D.S. Courtney Cox in the big screen adaptation of Masters of the Universe, he'd also prove the trump card to the battle for Castle Grayskull, as the forces of Skeletor pursued He-Man's rebel alliance to Earth.

Heck, The Key at the heart of their pursuit even sounded like a keyboard when played, so no wonder everyone was after it!


Instantly Masters of the Universe follows the beats of the original toy packed comics, which never had He-Man as Prince Adam. Leaving the cartoon created alter-ego behind, the film focuses on a He-Man who is purely Eternia's greatest champion and the sole hope of freeing a captive Sorceress and her mystic castle, from the hands of Skeletor.

Up until Universal Soldier, this was actor Dolph Lundgren's best performance. While similarly, much has been made about Frank Langella's masterstroke performance as his bone-faced nemesis, for me the standout is Meg Foster as Evil Lyn. 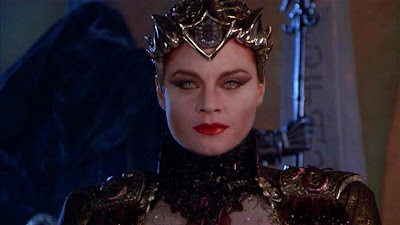 And those eyes aren't contacts! It's this cold, firm and cunning face that successfully has her portray the evil sorceress as the true power behind the Skeletor's quest. Adding weight to some of the film's cheesier aspects, and balancing them out in the process.

While He-Man's side sadly doesn't feature an Amazon-dressed Teela, all costumes are 'realistically' updated for an era where Hollywood was being led by aliens and terminating robots. Gwildor stepping in as a technological Orko helps this update, yet confusion reigns at the line-up of Evil Lyn's assembled team of mercenaries. Beastman (tick), Tri-klops - I mean Blade (cross), Mer-Man - I mean Saurod (cross), and with his hook hand, Trap-Jaw - I mean Karg (cross). Sure the new versions are all cool and all, but why go so close to the original characters, then wuss out when it comes to the names? 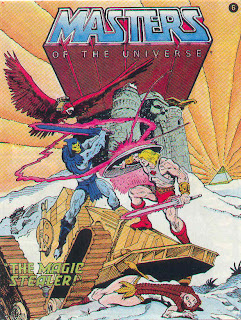 Despite the obvious hand of editorial / budgets in places, Masters of the Universe is a brilliant B-Grade action-er, with a straight forward plot that punches above it's weight in many occasions (despite the Sorceress now being a wrinkly old prune rather then belle of the ball).

Dolph's purpose built bulk and natural accent/mullet make an action figure live, the special effects are decently trippy in all ways 80's, and not only will He-Man's merchandise launching catchphrase still have you tingling twenty odd years on, the humour in the film will still make it 'family fare', which is always good when a majority rules debate is needed to decide what DVD to watch.

It should've stayed on the cutting-room floor:  The discovery Courtney's character makes upon returning to Earth. Seriously, I hate those cheesy 'everything-ends-with-happiness' resolutions. Bah Humbug. Luckily one of the first post credit scenes in comic movie history follows, and is so wicked, it is still a shame it was never followed through on.

Did you know?  Masters of the Universe 2 had a script that saw Skeletor's fall land back on Earth and devastate the planet as industrialist 'Arron Dark'. With Cannon Films folding first, the script was rewritten as Jean-Claude Van Damme action flick Cyborg (yeah, I haven't seen it either).
Posted by IADW at 11:54 am