In January, the Martians truly land at IDW Publishing! Mars Attacks crossovers into other franchises on a weekly basis, from Ghostbusters right through to KISS! While the event kicks the New Year off in a fun-filled way, it's these covers and hits that look set to lead the IDW January 2013 charge. 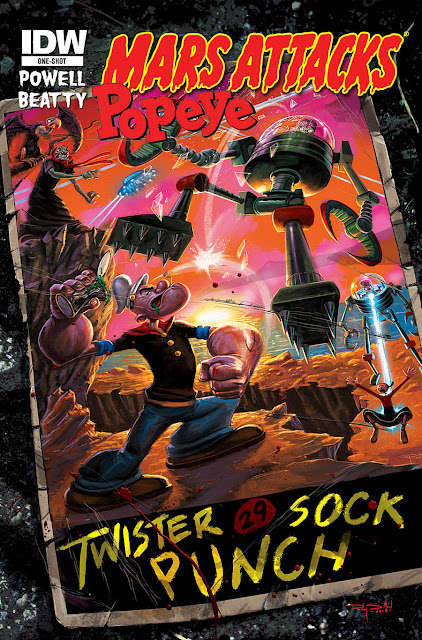 A Popeye first on IADW, if that cover doen't look like it sets the stage for the brawl to end it all, then I don't know what does! Could a Martians greatest weakness be a mere can of spinach?

IDW says: The weekly event of the year starts on the second day of the year! Mars Attacks Martians invade five different IDW timelines and universes this month, starting with their assault on Sweethaven. How can Popeye, Alice the Goon, the Sea Hag the rest of the one-eyed sailor's friends and foes possibly contend with this threat from beyond the stars? 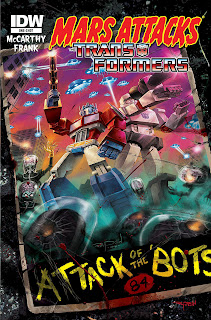 CLOSE CONTENDER: Ray Dillon - Mars Attacks The Transformers When the menace has Megatron side by side with Optimus Prime you know it has to be a major! Where are Grimlock and Soundwave? Have they fallen before the power of the 'Narp! Narp!'? Guess here is where we find out!

Other IDW January 2013 highlights include; Doctor Who: Prisoners of Time #1 kicks off a celebration of all the Dr's who have served since the franchises birth in 1963, Thundercracker's secret mission is finally revealed in Transformers Spotlight: Thundercracker, and Leo and co are trapped with Kang in Dimension X in Teenage Mutant Ninja Turtles #18!

What do you think?  Sound off below. For January 2013 solicits from other publishers as they're released click here, or for more IDW, follow the jump!
Posted by IADW at 12:58 pm