Next week on IADW, I will be chucking together a few random words of wisdom and wackiness on what hair-brained notion triggered me to start a daily blog in the first place. IADW Year One if you will. In looking back through retrospective coloured glasses, I thought it might be fitting to preempt that post by sharing the first online comic review I ever did, one for a site called Pendragon's Post.

The brief was open; Chose any comic in creation and write about it. A major fan of this particular 'Spidey era', I chose Web of Spider-Man #13. Now, reprinted here for all to see, is what my two typing fingers said in their online debut, about this web-swingingly good comic; 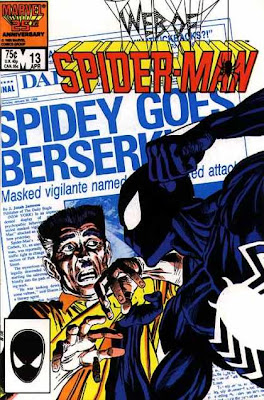 'Oh really Spider-Man? Look at yourself, you're so blasted smug. Either you were always the menace I said you were, or I've managed to convince you that you're a menace... And frankly masked man, I didn't think I was that good a writer.'


An often over-looked run in both the career of writer Peter David and the adventures of everyone's favourite wall-crawler, are the early issues of Web of Spider-Man. Issue 13 while unlucky for some, provides a stand-alone story where David creates a suspenseful issue after one simple spider-act divides the public as to the wall-crawlers intentions, delivering some thought provoking statemets on how the 'real world' media can manipulate the slant of their stories at whim and even in the name of believability.

As this perspective becomes fuelled by the cities various media, Pete becomes attacked by the public everywhere he goes. Left down, enraged and inconsolable he heads for a confrontation with longtime detractor and newspaper publisher J.Jonah Jameson, in turn actually becoming the menace the public believe him to be. While investigative reporter Ben Urich starts digging behind the hype to uncover the truth of the accident, the resulting skirmish between Spider-Man and ol' J.J.J will effect how both they (and the readers) see each other forever.

Mike Harris's pencils create a 'tv documentary' feel for the art, which perfectly suits a story tailored to explore one of the constant themes of Spider-Man: the cost of been a hero. Amazingly in such an emotionally charged tale Peter David still manages to drop in laugh-out-loud moments of classic spidey-humour, in an issue well worth backtracking for. 8/10 - DW
Posted by IADW at 9:52 pm