As Kiwi's, we're pretty chuffed at the Lord of the Rings. The kick-butt films showcase to the world what a beautiful place New Zealand is. Not that we can't have a bit of fun with it at the same time however. 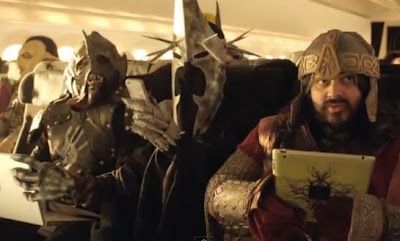 National airline, Air New Zealand has teamed with WETA Workshop to turn the boring spiel of 'trays in the upright position' into a Hobbit movie themed air safety video. Proving even Middle-Earth is Wi-Fi sufficient, director Peter Jackson appears among the actors involved, as does Gollum (though if I ever see him on a flight, I'm doing a Bane, a-la Dark Knight Rises and getting the hell out of the way)!

The only downside? Google offers a full translation of all the Kiwi accents involved. Click subtitles to laugh your way through what the world's internet super-power believes us Kiwi's are actually saying. Never, never trust Google Translate folks.