In February IDW launches a number of new titles, including a new ghost-fighting crew in Ghostbusters #1, and a relaunch of their G.I. Joe franchise, in, well G.I. Joe #1. With all the big name issue one-ery going down and around, these covers standout the best from their February 2013 solicitations. 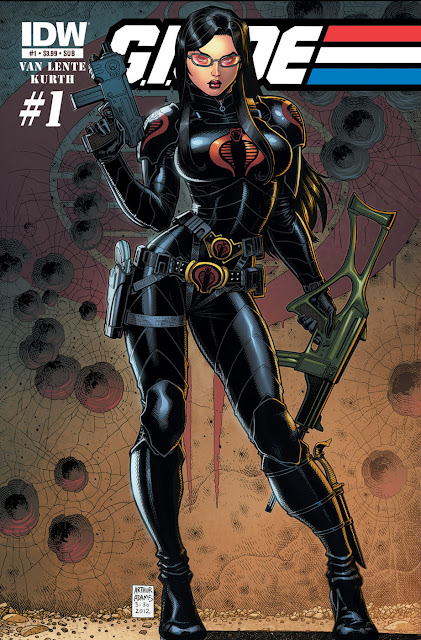 It must be great to be Arthur Adams. Drop back a bit from sight, then BOOM! pop up again and every hand you lay on the table is a winning one. Many would like to lay their hands on the Baroness too, but it might be safer to wait till she's put the bazookas down first, or at least the metal ones anyway.

IDW says: The truth is out: the world knows the G.I. Joe team is real. Now Duke leads his squad directly into the public eye, confronting Cobra on American soil! The best of the best just got better, as Fred Van Lente and Steve Kurth lead the charge and we roll out one new G.I. Joe title a month for the next three months!

Star Trek: Countdown to Darkness #2
David Messina
The prequel to next year's Star Trek sequel fires its second issue out of the cannon, with an Uhura that almost looks as friend as she does foe. Could this movie be the one where she actually shows the boys how it's done? Could be.

Transformers: Rage of the Dinobots #4
Ken Christiansen
What is it Paul Hogan says in Crocidile Dundee? That ain't a knife. THIS is a knife!' Seems ol' Grimlock subscribes to the same train of thought.

What do you think?  Sound off below. For February 2013 solicits from other publishers click here, or for IDW Publishing's full February line-up, follow the jump!
Posted by IADW at 12:44 am