I'M THE JOKER, NOT A KING! Batman Chess Set Lightens The Room And Wallets

This time of year it's hard to find any money floating round the house or in the wallet, let alone a sweet eight hundy. Still if the lint and odd bubble gum wrapper in your pockets reveal something more, you might be able to splashout on this light-up-able (no that's not a word, and yes I'm going to hell because of it) Batman chess set. 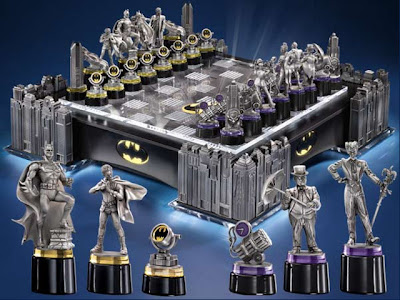 Sure Nightwing takes a dive so Commissioner Gordon, the Batmobile and a Gotham tower can join Batman, Robin, and Batgirl fighting Joker, Penguin, Riddler and Catwoman, but since you'll probably use the pieces to play G.I. Joe type war games rather than the one for which the pewter pieces were actually cast, it's a small point anyway.

Every bat signal lights up, so it will perfectly match every other piece of bat memorabilia in your home already, leaving the only clash to be the one that happens on the chess board itself. More after the jump.
Posted by IADW at 4:41 pm