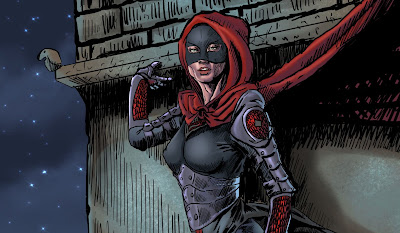 Literally mere hours out from catching the first of three planes back to New Zealand for the holidays, I am assembling a set of digital comics to read in flight mode at 30,000 feet. One of the first to be sorted is a recent find, brought to my attention by creator Wolf Beaumont. It's called Venezia and it's currently breaking hearts and records across the Kickstarter realms and beyond. 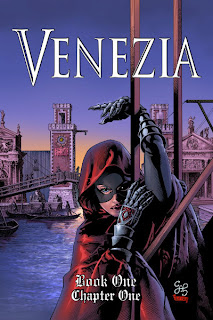 Now I know it seems everyman and his dog has a Kickstarter these days, but trust me, this one is different. It's set in 16th century Italy (not Manhattan, Gotham or now), and tells the tale of a female who takes to being a vigilante on the streets and waterways of Venice, after the murder of her parents.

As the blood starts to spill on streets themed in revenge, the backdrop of Venice is stunning in its detail. Illustrator Brian McCranie literally leaves no stone un-detailed in his efforts to take you to another time. And he succeeds. Coloured by Omi Remalante Jr., as the first issue sets both the sagas origins and future, we get to see how Moncenigo's evil nature turns Venezia's life around and tragically gives it an all new purpose. 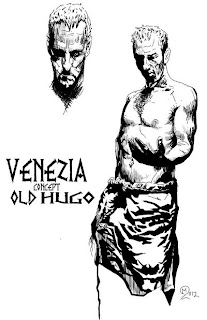 For me I get two hits of the 90's from this book, and in the best of ways possible. The tale of family honour vs revenge and culture draws comparisons to the early issues of Billy Tucci's Shi, yet the ink work that textures this tale is like a breathable characteristic itself, raw, like in the days of DC's sadly defunct Milestone imprint.

As a Kickstarter crew, these guys initially funded the majority of the books efforts and now take pledges, to help them hit issue two and beyond. If you are after something new to indulge in between all those meals of leftovers the holidays seem to provide, feel free to visit the team on the Venezia Facebook fanpage or even drop over to the funding drive and flip a few dollars their way in return.
Posted by IADW at 3:13 pm