YO COBRA! Cosplayers Of Cobra First Legion Unite For The Common Good 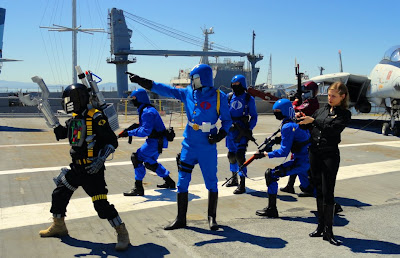 The Baroness rounding up groceries for food banks? Snake Eyes stalking the streets for toys to take to a children's hospital? Better believe it folks. While it takes only the most universal of plights to unite the forces of good and evil, the cosplay efforts of the Cobra 1st Legion show you can have fun, make a positive difference and show off your love for the G.I. Joe Universe at the same time - Dreadnok or not. 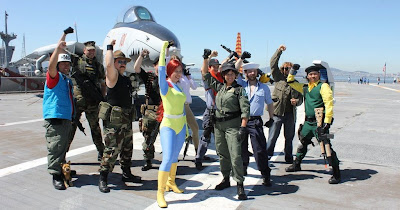 On a personal note, Dial-Tone (far right above) and Law and Order (far left) were the first two G.I. Joe toys I ever owned. I'm glad to see I'm not the only one that remembers Law, although I'm sure Order used to be an Alsatian. Maybe he just shrunk in the wash.

The self made costumes the team employ are outstanding, and while the Legion are always thirsty for new 'real american heroes', they have also managed some sweet on-location photo shoots, like as Alcatraz Prison and onboard the U.S.S. Hornet aircraft carrier. 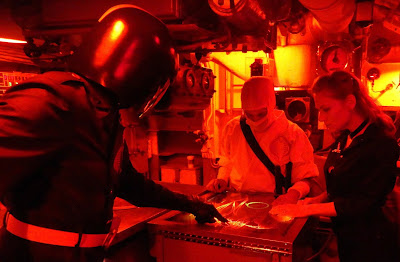 If you have a desire to join the ranks of Destro, Cobra Commander and Duke, or just want to check out more shots of the guys and gals in action figure based action, you can visit them on Facebook here, tumblr here or even on their own website here.
Posted by IADW at 11:23 am