GUARDIANS OF THE GALAXY: Bautista Signs On As Drax the Destroyer

In the coming months, this blog will focus more on the 'other' characters running amuck in the worlds, nigh universes of comics. Characters like Drax the Destroyer, who has recently been cast for the upcoming cosmic Marvel Studios feature flick Guardians of the Galaxy as MMA fighter Dave Bautista. 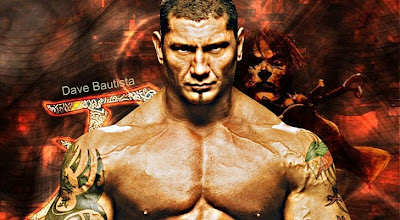 While in the 90's, Drax was almost a foil to the spin-off adventures of the Infinity Watch, since Marvel's cosmic rebirth in the pages of Annihilation, and the ongoing Guardians of the Galaxy comic series by writers Dan Abnett and Andy Lanning, he has been anything but. 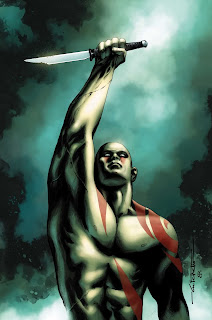 Joining Chris Pratt as the half human (I'm guessing) point of view character, Star Lord, Drax is an obvious choice for membership, given the shadow of Thanos looms large in the future of Marvel movies. After his family is killed by the death loving despot, Drax is bestowed with a green muscular body befitting his fighting skills, in order to get revenge.

As for Dave? how can you say that's not a perfect match - they both have arm tattoos!! No multi-hour Mystique-ish blue paint make up sessions there. Wait, you mean Bautista still has to be turned green? Oh well, will give him fuel for the fight scenes I guess...