In the 90's I loved Dark Horse for two things, Sin City and Predator comics. Then they launched a line of super-hero titles in a shared universe called Comics Greatest World, and I loved Dark Horse for three things Sin City, Predator comics and Adam Hughes on Ghost. Now the gang are rounding up another eclectic mix of heroes to fight injustice in a unified world, and that line shakes out a little like this... 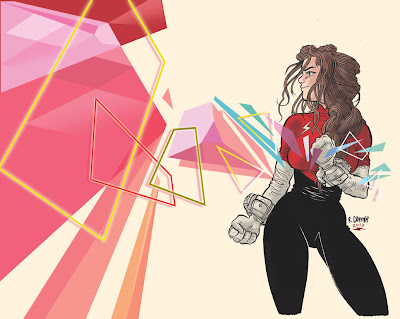 Hit Pick  Catalyst  It's written by Joe Casey! Trust me, not only is this guy an instant 'buy', he is one of the few writers who can write 'modern' and 'fresh' and not just 'revamp'. Now Dark Horse give Casey's endless imagination in short sentences a nine issue mini series to revive anyone from the publisher's entire superhero library. It's a match made in heaven.

Bloodhound  When is a DC book not set in Gotham? When it's originally published by DC, only to be caught by its creator and taken to Dark Horse. Now Travis Clevenger, the cop turned con turned FBI superhero sniffer dog returns. Written by creator Dan Jolley, look for a collection and new moral dubiousness in Dark Horse Presents.

Hit Pick  The Black Beetle  A break-out smash for Dark Horse already, and created by someone I dub one of the best artists in the modern game, Francesco Francavilla, a collected edition is on the way, along with an all-new ongoing series.

Ghost  Having risen from comic limbo to her own mini series, the apparitional avenger continues to evolve into her own ongoing, written by Kelly Sue DeConnick. Shows what a decent pair of colt .45's will get you huh (and what a pair)! 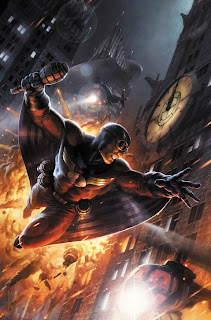 Hit Pick  Captain Midnight  A 30's star of pulp comics, radio serials and Ovaltine commercials, Captain Midnight returns in Starman like fashion to find the kids he left the world to have wrecked the house in his absence. Now the genius inventor/Nazi fighter's adventures turn ongoing series in July, as he sets out to put things back in order.

The Answer  An expert puzzle-solver is inducted into a group of earth's smartest people, until her bosses reveal they have other plans in mind. Luckily The Answer drops in to rescue her before the question can be asked 'Why?'.

Trekker  Female bounty hunter. Dystopian world. Hey, in sci-fi what world isn't Dystopian? Well there was Unicron, but that was a giant robot with hunger pains so it doesn't count. Look for Trekker creator Ron Randall's original 80's work to be collected, with new kit set for, you guessed it, Dark Horse Presents.

The Victories  Me, I never got Powers (it's still on my 'See what they're on about' list). Which, like school Math class, puts me behind, as now that book is plugged to launch this soon-to-be ongoing, by Powers co-creator Michael Avon Oeming. 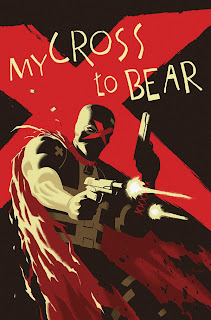 X  Yeah, you'd stick to the shadows if you had Marvel/ Disney chasing you for a trademark too. A fellow survivor from Comics Greatest World, X is redefining 'vigalante' with a bullet and a prayer in an ongoing this May. Or actually just with bullets. God bless comics.

Blackout  When you're the boss, everyone loves your idea until they get out of your office. Created and designed by Dark Horse President Mike Richardson, this book deals with how an everyman would handle finding a suit that grants access to a mysterious dimension. First thing I'd do? Install Wi-Fi and build a McD's. The future is franchised folks.

Brainboy  Fred Van Lente and Freddie Williams II make this pulp revival rock this summer in Dark Horse Presents, with a guy who can manipulate people psychically for corporate money. Not Monopoly money, no one does anything for that.