News - from the BBC to the New York Times, these networks of staff are often prestigious outfits of worldly current events, with hard hitting investigative research and journalism at every point. Then the station calls for a picture of modern day Damascus and one quick Google image search later, it's a computer illustrated version of the city going to air, right from the animated scenes of video game smash Assassins Creed. Whoops. 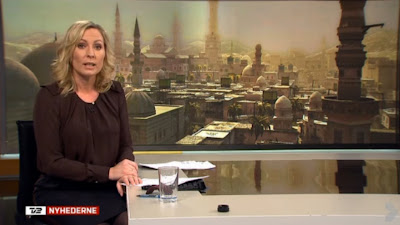 Hey, at least her outfit matches. While we all sit back and think of what could've been if they had needed to search other terms like 'European Dictator' (Doctor Doom), or 'Civil War Island' (Genosha), I'm betting the artist(s) responsible are pretty chuffed - work mistaken for reality by a news organisation. Now that's something for the CV! (Via)