ONE STEP CLOSER TO A VISION SERIES: Avengers AI, Not iAvengers, Wired For April

The Vision, his perceptions of and history in the Marvel Universe, make him one of the most interesting characters in comics. Yet aside from a few mini's, the old solo limelight has never shone his way. Part of the mixed up family at the heart of the Avengers (Sorry Cap, Iron Man and Thor, I'm talking Wasp, Pym, Vision, Wonder Man, Ultron, Scarlet Witch), Vision now gets more of a groundswell, heading a team of artificial intelligences (intelligencia?) in the July debut of Avengers A.I. 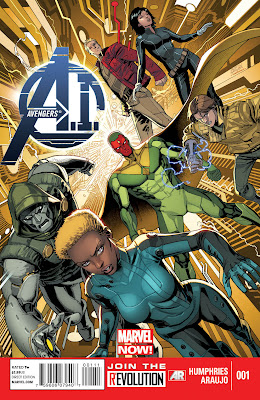 What, no H.E.R.B.I.E. from the old Fantastic Four cartoons? How about my Android phone? I swear that thing has a mind of it's own.

Announced on USA Today, the ongoing series will be written by Sam Humphries, with art by Andre Lima Araujo. Avengers A.I. will be tasked with keeping an eye on a rapidly developing culture within our society, one that is no longer happy to be just tools of Mankind's build for the future, but part of it (if not ruling it).