Sure Superman was going to be in. Harley Quinn. Wonder Woman. All pretty much easy picks for the playable line-up of video game Injustice: Gods Among Us. Now we get to the really sweet end where a few B-listers get called in. Not B-listers in terms of cool or concept, just not as front row for licensing as that creature of the knight that had the bright yellow oval on his chest. Want proof? Here's Raven. 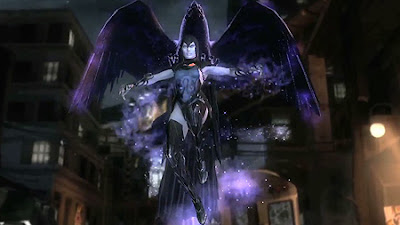 While this incarnation of The New Teen Titan plays more on her supernatural daughter/daddy relationship with Trigon, than as the gentle empath creators George Perez and Marv Wolfman initially played her as it's still pretty wicked seeing her soul self - take flight. Trigon himself also appears, but that doesn't mean her adversary in the below vid Catwoman, isn't going to get her licks first.

Injustice: Gods Among Us hits all major consoles from April 16.