THE CHOICE OF A NEW GENERATION: Tardis Themed Soda Machine Wins Out

Sure Orlando, Florida has has that mouse invested amusement park, but who wants to go there when you can see Epic Comics' customised Tardis vending machine? Soft drinks may be the new evil in the eyes of the pilates pirates and mung bean hippies, but there's nothing better to wash new comics down than an icy cold Sprite. Check this out; 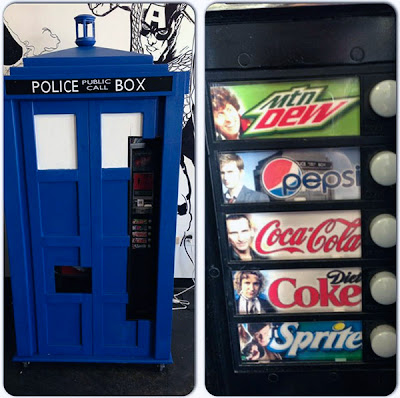 While Coke find the monola to fork out for that free plug I gave them, you'd have to hope this piece of cool either carried more sodas on the inside than it seems on the out or the Tardis trait can be applied to its contained beverages. Who doesn't want their Pepsi to last forever?

What do you think?  For making of shots or just to say 'Job well done' visit the Epic Comics folk on Facebook, right after the jump.
Posted by IADW at 10:59 am