THEY SERVE OUR KIND: Hoptimus Prime Beer Transforms You As You Drink It

After a few brewskies, ever pretended you are a Transformer and 'transformed' to a ball and back for an audience? Or maybe argued over whether the transforming sound from the infamous cartoon was 'chick, chink chunk, chick' or 'chick, chuck, chunk, chink'? Well now you can add even further fuel to your thirst quenching fires, with this; Hoptimus Prime beer from Robinson Brewery. 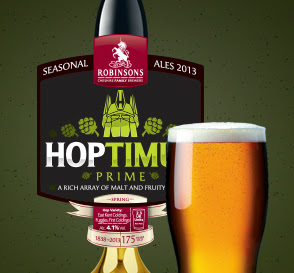 With a taste described as 'malty, fruity hop, crisp', Hoptimus Prime is said to transform your ale expectations and satisfy all of your hoppy needs. Just like 'beer vision glasses' used to do I guess. Now if the case was done up like a big rig, well that would be just to cool for words. (Via)
Posted by IADW at 9:17 am