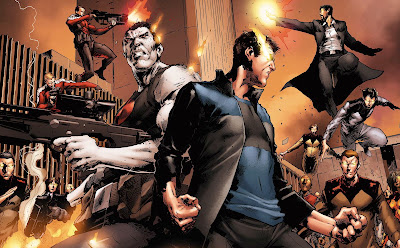 If the main comic book publishers were a rock/pop band, Valiant would be their Beyonce. their Gwen Stefani. Their Slash. That person on the group that you just know has that x-factor, and is showing with every chord played they are aiming for nothing but high-notes, ready to breakaway from the rest. Continuing that pace in their July 2013 solicitations, here are the three best covers of that line-up;


COVER OF THE MONTH: RYAN SOOK - QUANTUM AND WOODY #1 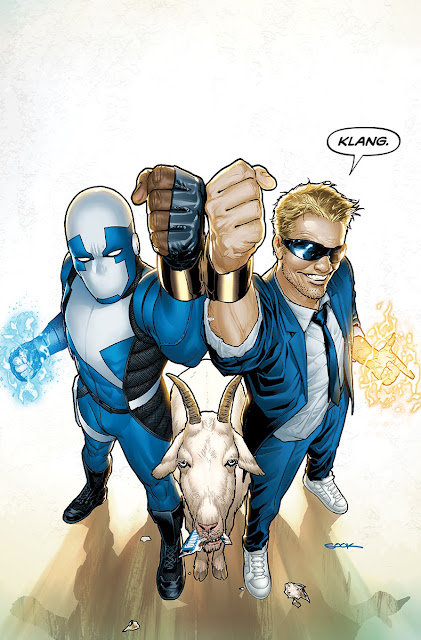 Ryan for my money, is my 'Adam Hughes'. I still gush over his Kamandi pages for DC's Wednesday Comics, so it's great seeing his clean fluid linework get a primetime gig - especially on a title that suits as much as a new series of Quantum and Woody!

Valiant says: Once upon a time, Eric and Woody Henderson were inseparable. Adopted brothers. Best friends. Brilliant minds. Years later, they are estranged siblings, petty rivals, and washed-up failures. But when their father's murder leads them into the throes of a life-altering scientific accident, Eric and Woody will find themselves with a whole new purpose - and a perfectly legitimate reason to wear costumes and fight crime. Go big or go home, folks! Quantum and Woody are coming! And the action-packed, zeitgeist-shredding exploitation stunt comic you demanded is here at last. (And, yes, there will be a goat too. Eventually.)

Bloodshot #13
Dave Bullock
Oh this is clever. Do you see Bloodshot standing on a bleeding gun, surrounded by a giant skull or two Vegas dancing girls? People are outside your door with a straight-jacket and valium if you answer incorrectly, so chose wisely my friend.

X-O Manowar #15
Ladronn
Now if that doesn't look like a movie cover draft in the making, I don't know what does! Alien races, a lone warrior and one giant 'Don't F%$% with me' weapon. Wasn't there a time when that was all a decent movie needed?

What do you think?   Sound off below. For Valiant's full July line-up, click the jump!
Posted by IADW at 3:15 pm