IN A SINGLE BOUND: Superman Turns 75 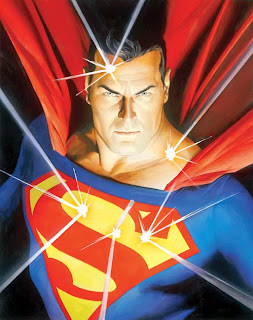 Not all men still have a chiselled jawline at 75, but Superman does. Yesterday, the Man of Steel turned three quarters of a century in age. Now before you ask 'Where is the commemorative edition of The Greatest Superman Stories Ever Told amongst DC's April solicitations?', let's turn our attention to the efforts of the people who define better than DC why Superman is important - the regular fans like you and I that believe.

75 years of the never-ending battle saw city-wide commemorations in Cleveland, the birthplace of Jerry Siegel and Joe Shuster's infamous creation. The city declared the 18 April 2013 'Superman Day'. A memorial flag was hung from a City Hall bathed in primary coloured lights, as were other local landmarks.

Family members of both creators attended festivities, a young man named Taliesin Hall was chosen to be 'Superman' for the day and people were encouraged to wear the 'S' at a number of events, including at the airport, where a life-sized statue of the Man of Steel stood at the entrance to a new Superman exhibit. 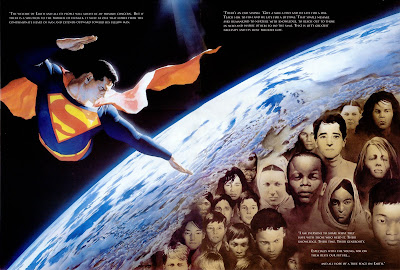 The town also encouraged fans to tweet photos of themselves in Superman-like poses using the hashtag #SuperCle. The social media party didn't stop there, with many creators and fans taking the day to share their favourite memories of the original super-hero.

I've written before on What Superman Means To Me, and this blog is littered with some of my favourite memories from my life as a Superman fan, but the idea of everyday people tweeting their super best illustrates my key reason in a nutshell;

"It didn't matter if your cat was stuck in a tree or a bomb threatened your national landmark, Superman didn't discriminate on the size of the crisis - unlike other 'heroes' - if it mattered to you, it mattered to him and that's what made him a 'super-man'."

The palpable magic that comes from the thought of two young guys brainstorming the creation of a fictional hero to inspire people during the Great Depression is ripe for a blockbuster movie itself. Putting the lawsuits and nastiness generated over the rights to what that creation has become aside for a minute, the fact that their creation is still teaching people the world over to 'Look Up In The Sky!' after 75 years, is something we should all take a moment to pay our respects for. Marvel Zombie or not. Comic fan or not. DC Entertainment or not.