OPTI-ENTER PRIME! The Fan Made USS Enterprise Transformer Will Blow Your Mind 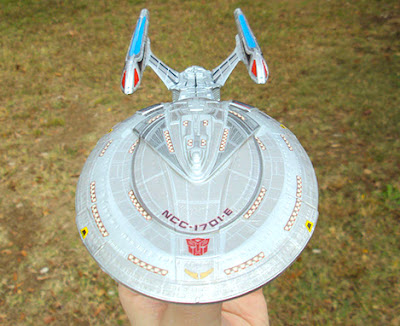 The film Star Trek: Nemesis gets a lot of sh!t dumped on it, and I'm not sure why. Personally I thought it rocked like a Chilli Peppers concert.

A pre-Bane Tom Hardy tore up the screen as Shinzon, the main protagonist and when the Enterprise rammed the enemy craft, I think I even let out a 'Hell yeah'! It was the most full-throttle action I'd seen from the franchise and with all the metal flying through the collision, it was like all the best Unicron scenes from the animated (and still unrivalled) Transformers movie in one. Infact if the USS Enterprise had got up, transformed and walked across the wreckage towards Shinzon, it would be my top sci-fi moment of all time.

Well now it can. Yes, this USS Enterprise can Transform into a killer Autobot, and the as fate would have it, the guy who put it all together goes by the DeviantART i.d of Unicron9. 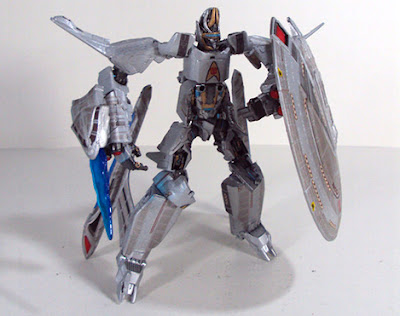 With a real name of TJ Wilferd, 'Unicron9' makes quite a few custom toys like this, but it's this one that blows your mind at the potential of what an undercover robot in disguise could do in a different universe. Maybe IDW could even do in their next Infestation-like crossover?

What do you think?  To see more of Unicron9's custom creations, click the jump.
Posted by IADW at 1:06 pm