PANEL BEATER: My Comic Of The Month: Harbinger Wars #1 (of 4) 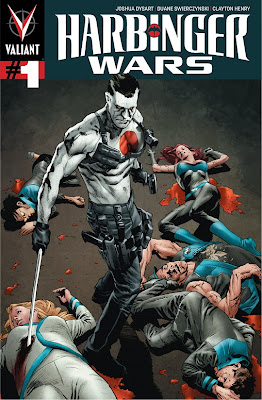 "It's time you heard the news, friend. I'm everybody's problem."

From teleportation to turning into a multi-story Lion King-ish character and devouring soldiers, the government's trained psyiot children are a force to be reckoned with. Their handlers at Project Rising Spirit want to use them for political and capital gains, Toyo Harada wants to control them as part of his Harbinger Foundation, Peter Stancheck wants to set them free, and Bloodshot (a reformed Harbinger himself) wants to become their leader - and bring down anyone who gets in his way.

But the superhuman telekinetic children themselves? The psyiots? Tired of being made to do unspeakable things, they just want to die.

Enter Harbinger Wars #1 (of 4). Yes, an event. Yes, from Valiant Entertainment - and damn entertaining it is too. This issue is fun, well-paced and literally bigger than a Hollywood blockbuster made print. The story is relentless, easy to follow, and quite frankly the best comic I've read outside of Saga in way too long. 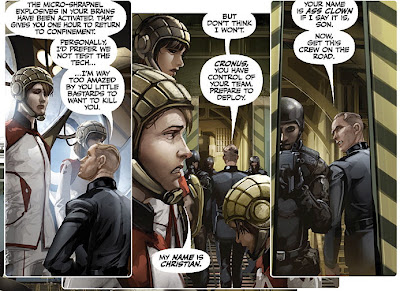 See? Instantly engaged. Me, I wasn't even thinking of picking this book up. I went to grab the first issue of Planet Death in X-O Manowar (also by Valiant and also really good), then scooped this up as well.

Harbinger Wars is extremely new reader friendly - without dragging its heels for longtime vets in being so. All the main players are covered at the start, while the adventure itself begins with a whole bunch of new characters, so all readers start off on new turf. Teased as having "No winners. Just survivors." by Valiant, I think these newbies will decide who survives, but how is not yet predictable.

Put together by issue writer, Joshua Dysart and fellow wordsmith, Duane Swierczynski, not only are the various plot paths of the Harbinger Wars surprisingly clear to follow, each character has plenty of screen-time. When we are talking a cast this size, that takes some doing (bleeding Monk oracle dude, that includes you). 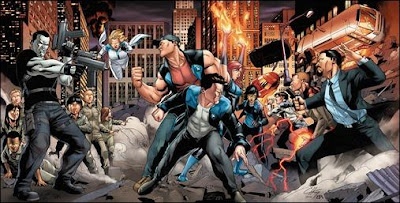 Three different artists help pull off this feat, but don't let that fool you. I literally didn't spot one of the artist changes, as I was so engrossed in the story - and usually that's something that really grinds my gears. From Clayton Henry to Clayton Crain to Mico Suayan, all three artists tell a good united story and thanks to the colouring talents of Brian Reber, all make for a consistently stunning looking epic.

It's odd a mini-series whips up this kind of a reaction in me, but boy does Harbinger Wars #1 deliver. Loads of insanely well-written story in almost 30 pages, none of it filler and only $4 US! Valiant's first family crossover event is how any event, nay, any series should start. The only downside is, if this is what Valiant "has been building to", I only wish I'd brought more Valiant between there and now. Something I'll be sure to rectify in future.
Posted by IADW at 6:02 pm