All the time Dan Abnett and Andy Lanning were writing Guardians of the Galaxy it should have been the industries #1 title. Throw an Iron Man on the team, Brian Bendis as writer and a major motion picture set for 2014 of the same characters, and what do you know? It is. That and event Age of Ultron almost locked DC out of the Top 6, with Marvel the top publisher due to a unit share lead of 13.9%. 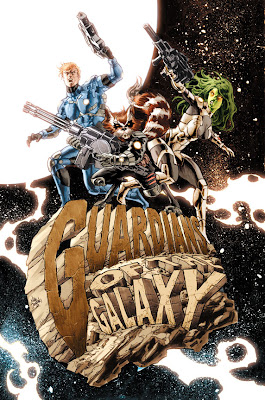 MY THOUGHTS: Did you see how many titles bet a new Wolverine #1? Maybe times truly are changing. Now let's see Marvel maximise this heightened exposure of their cosmic line and get more titles up and running. A Silver Surfer that actually soars, and maybe a rotating character feature title as well.

Full March 2013 stats after the jump.

Coming in at #3 on the graphic novel chart (only bet by two Batman books) is the TPB Hawkeye Vol1 My Life As A Weapon. This is a fantastic result for the Avengers beleaguered bowman and while the movies may have contributed, I don't think their biggest swells were in Clint's direction. Thanks to crack creatives, the head of Avengers West is finally in his own hit title!

THE #1 SELLING COMIC OF MARCHS PAST: