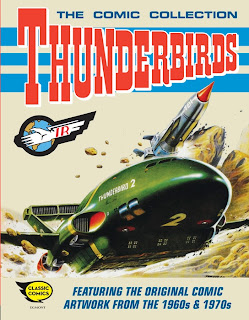 Weekends just aren't the same without a cup of milo and the puppeted dramas of Thunderbirds, Captain Scarlet, Joe 90 or Stingray to be engrossed with. For generations of imaginations, these adventures cut the strings on what 'children's entertainment' could provide and offered up worlds as cut and thrust as any James Bond adventure.

Now, publishing house Egmont has signed a deal with ITV Studios Global Entertainment, who own many of the fantastic brands created by Gerry and Sylvia Anderson, to publish the classic Anderson original comic strips of these characters, including artwork, in all-new formats.

With the Thunderbirds 50th anniversary looming in 2015, Egmont's first release this October will be a collection of the hit franchise's original 1960's and 70's comic strips.

While the day was never really saved until Thunderbird 2 arrived on the scene, fans needn't fear their wallet being in peril trying to afford these new 'Best of' collections and e-books. Egmont's current e-comic range on iBooks sell for £1.99 each, so we can only hope these will follow along that same flightpath.