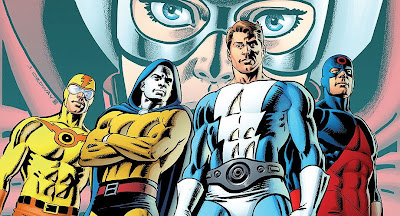 The T.H.U.N.D.E.R. Agents launch into a new IDW series in August, and you have to wonder if this former DC series is starting a new trend, as the age of 'creator owned' steps forward. If a series falls at one publisher, can another pick it up and run with it? With IDW the new home for this and Marvel's Transformers, you have to be thinking 'Yes'. From their other August 2013 solicitations, these are the best covers from that range. 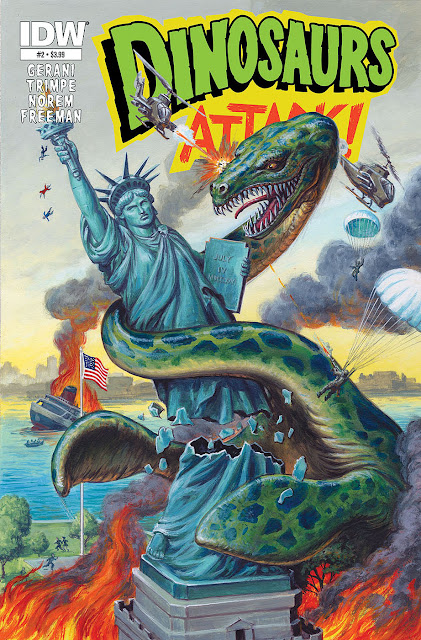 There's nothing like a dinosaur going crazy to make for a sweet image. Even if it's not Grimlock. Make said reptile enormous and attacking a national monument, and forget it, it's pop illustration at it's best.

IDW says: The thrilling DINOSAURS ATTACK! saga continues as Washington D.C. is infested by a flock of pteranodons, with disbelieving politicians their terrified victims of choice. Meanwhile, stalwart scientists try to reverse their terrible mistake and send the prehistoric predators back into the Jurassic past, where they belong. But will an evil force beyond anyone's control stand in the way of these Earth-saving efforts?

Transformers: Regeneration One #94
Guido Guidi
Because it's Omega Supreme! Showing Metroplex that the original transforming Autobot building is still the best, all those been blown apart in this visual are probably the 'bots who didn't wipe their feet first. I know I'd get tired of that.

Fever Ridge: A Tale Of MacArthur's Jungle War, Vol. 1
Nick Runge
In the jungle you never know when your comrade has snapped. Is this guy standing dramatically by a waterfall, or taking a few quite moments to have a pee? The answer; as long as he's sporting a gun - don't ask.


What do you think?
Sound off below. For IDW's full August line-up, follow the jump!
Posted by IADW at 7:08 pm