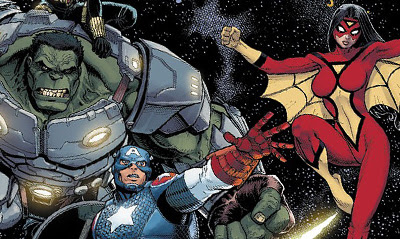 In August, Marvel launches Infinity - no it's not a joke about the life of events in the comics landscape - it's the latest galactic invasion set to invade Marvel titles and wallets everywhere. If Infinity sorts out and gets me more amazing Spider-Woman art like in the above by Arthur Adams, it can be Infinity +1 for all I care (although I hear that's coming next year). When it comes to August 2013 solicits, these covers take top honours. 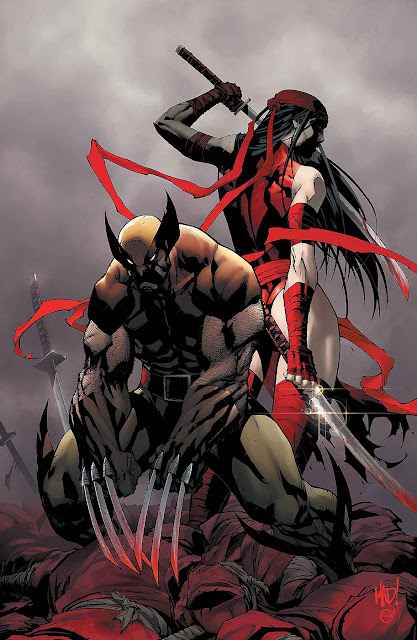 Make that Spider-Woman and Elektra. Both of these females need this kind of exposure, and come on, who hasn't wanted to see Joe Mad draw Elektra and The Kingpin? Put Wolvie, todays man of the moment (trailer due soon), back in his unbeaten brown and golds, and this cover is already iconic for the ages.

Marvel says: Wolverine and Elektra in a climactic battle against the Kingpin! Who will win? Who will lose? Who will get stabbed by something sharp and pointy? It's the stunning conclusion of Zeb Wells' and Joe Mad's epic tale of ninjas, blades, and sweet revenge!

X-Factor #260
David Yardin
Polaris vs Quicksilver? What two siblings can't wear the same colour? Despite the fact this series is wrapping it's climatic storylines up, David Yardin shows no signs of slowing down on cover duty. Hopefully wherever Pietro steps next, David is right behind him.

Avengers Assemble #18
Jorge Molina
If Marvel's going to drown all the characters I compliment, Elektra better not take on Hydro Man for a while. Still this is more great Jessica Drew art and she's sitting... err sinking pretty on the cover alone. Yip, Infinity could be Drew's overdue big break.

What do you think?
Sound off below. For Marvel's full August line-up, follow the jump!
Posted by IADW at 3:27 am