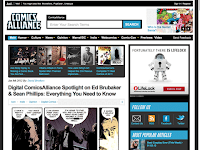 I know this is almost a week late, but I wanted to raise a glass to the team at Comics Alliance, which last weekend was closed down by AOL. I held off on this post in the hopes that this week may see a return to action, but alas it has not.

Comics Alliance was my favourite professional comics website on the net, bar none. They focussed on artists and writers as much as they did comics, and covered other publishers in depth, not just the big two. They promoted what we the comic fans were up to and gave their opinion in equal doses. It was a brilliant site, and even in it's inert state still makes for an awesome web resource.

To all the team who brought CA to life, I hope your next venture goes just as well, no doubt we will all be looking for it.
Posted by IADW at 4:59 pm