MAKING A MARK: Nina Levy - The Mum Who Drew 2,000 Different Napkins For Her Sons

Making A Mark gives an insanely talented artist some IADW brag-space. Today goes to a very loving Mum, Nina Levy. Nina drew 2,000 different images of her sons favourite characters on napkins, to include in their lunchboxes. What's even cooler is on many of the posts, the artistic mother tells you the reason and response she got for each piece. Enough talk - onto the art! 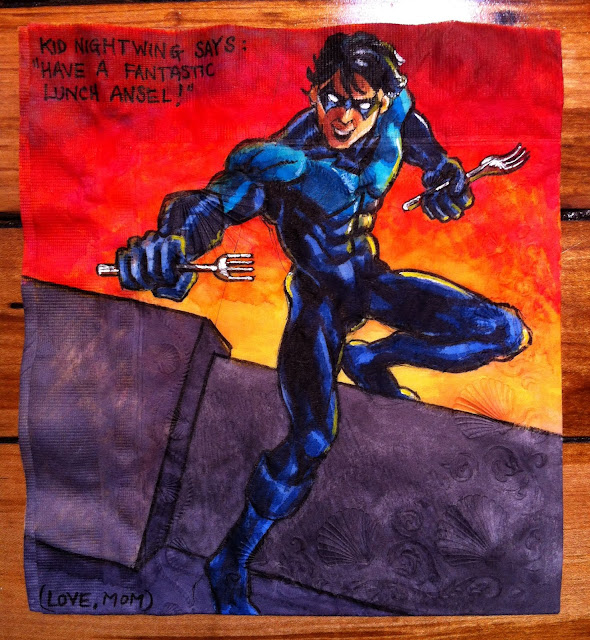 Amazing stuff huh? I feel an instant kindred spirit with her children, in that the biggest chunk of the gallery is devoted to Dick Grayson, one of the key characters in my fan-childhood too) in all his forms; Robin, Red Robin and Nightwing above there. In many drawings, weapons are replaced or strawberries added to help with teachers comments that many napkins are based on video games and "violent graphic novels". 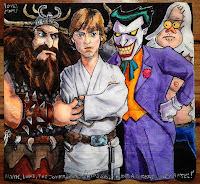 Alvin The Treacherous, Luke Skywalker, The Joker and Skips may make you worry what the galaxy's best Jedi would do with The Joker wispering in his ear, but Nina says "My sons are just not quite willing to accept that so many of their favorite characters are voiced by one person, Mark Hamill." And fair enough - it is one of life's harshest truths! 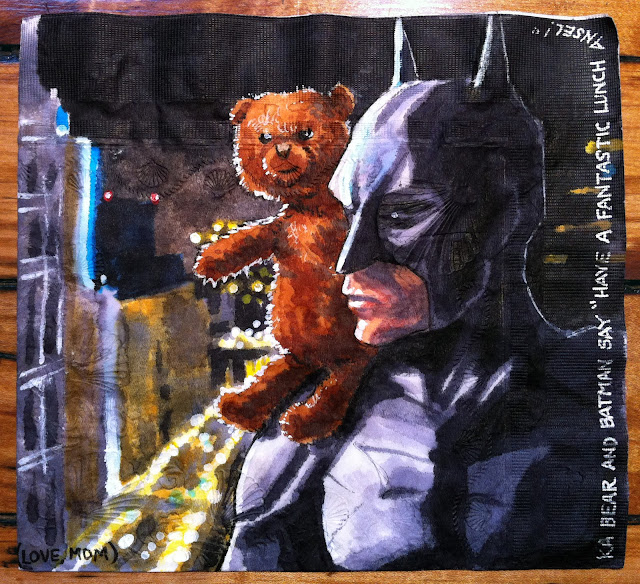 "Hosting the "Going Home Bear" for an evening is a major Kindergarten event at my sons' school. Each child has a turn to take the bear along for his afternoon and evening activities, copious documentation by a parent with a camera phone is strongly encouraged. Ansel and Archer carefully tucked the bear into his own bed in front of our wood stove, but we imagined that he had an exciting evening out with a poorly drawn Dark Knight."

If that's poorly drawn on a tricky paper stock such as a napkin, I'd hate to see brilliant!  There's only two problems I can see; 1) they are all too good to wipe your mouth on, and 2) prints need to be for sale! 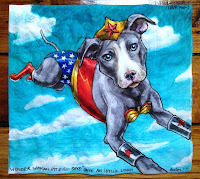 If there is any subject Nina masters more than heroes, it's canines. Here, after commenting "Ansel was a big fan of Wonder Woman in the days before he received the message that boys should not like female superheroes in flashy outfits", Nina turns the powerful and tenacious Diana into a Pitbull.


What do you think?  To see the amazing full range of completed napkins, featuring everyone from Hellboy to Invincible to Pokemon, visit Nina's very own blog right after the jump!
Posted by IADW at 10:57 am