During the Adam West Batman days, I'd pretend my top-bunk was Wayne Manor and by jumping to the 'Batcave' below, I was transformed into Robin, ready to right wrongs. That is until Mum would knock on the door and say 'For Christ sake Dan, you're twenty-six!' 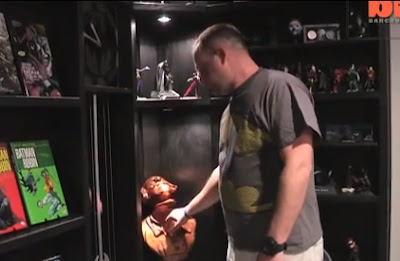 Jokes aside, during those times, I would never have guessed that some people (cough) Chris Weir (/cough) would have the money ($150,000) to build a Batcave themed movie theatre into their house, let alone stock it with over 2,000 comics. Forget whatever The Riddler is up to, the fact I don't have one of these is the real crime...

Somehow the only thing my Shakespere would throw it's head back for if I owned one, would be to laugh at my notion of having a mansion. Stupid Bard... did he ever write anything as good as Batman: Year One? I think not.
What do you think?
Posted by IADW at 9:45 am