When it comes to sports, few comic characters make such a statement (or intimidating threat) as 'The Unstoppable Juggernaut'. Charles Xavier's step brother and Onslaught's infamous punching bag, Cain Marko has been an unbeatable force in comics for years.

Wilson Chandler may not have the Juggernaut's bulk as he storms up courts of the NBA, but that doesn't mean his mantra has to be any different. Just look at his back; 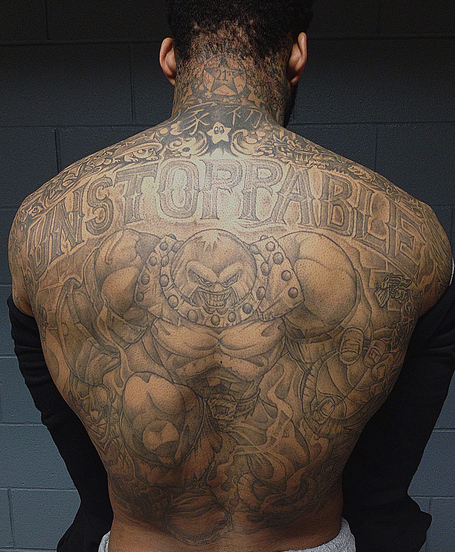 Now that's some heavy-duty punishment! Speaking to Denver Stiffs about this mammoth back tat, Wilson states going 1-for-naught wasn't his first thought when getting his tattoo artist Reggie Tatz to do a Marvel character.

"I was a real big fan of X-Men. Growing up I used to watch it a lot. I was trying to think of a great tattoo that I could get and mix it in with basketball. At first, I was thinking Wolverine. The idea [of the Juggernaut] came from my tattoo artist. This was when I was healthy and before all the surgeries; I used to go to the rack pretty hard. He was like, "You should get the Juggernaut" because they called me Unstoppable Juggernaut, so I thought that'd be kind of cool."

What do you think?  For more of Wilson's tattoos, including Kenny, He-Man and more, click here. To visit Reggie Tatz's gallery, click here.
Posted by IADW at 9:54 am