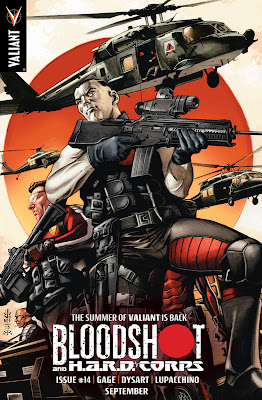 The first Valiant Summer set the comic industry sizzling, with the return of titles Bloodshot, X-O Manowar, Archer and Armstrong, Harbinger and Shadowman. Now the second Valiant Summer will turn that sizzle into a scorcher.

Having already announced a new Quantum and Woody series, plus an upcoming Unity crossover in a nod to Valiant's iconic event of years past, Bloodshot gets renamed in September's #14 as Bloodshot and H.A.R.D. Corps (following the events of The Harbinger Wars), with a new series of The Eternal Warrior also set to fire up. 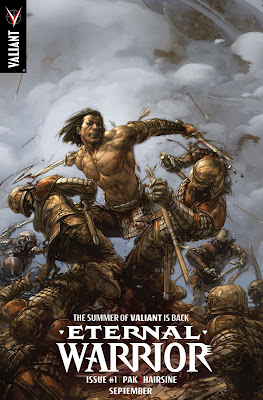 While the cover above by JG Jones is enough to make anyone jump on the H.A.R.D. Corps addition, Eternal Warrior is one of the titles I was hoping would be in the first batch, so after a year of the odd cameo through Valiant's current range, it's wicked to see Gilad is getting his due.

The immortal who fights for the Earth at the side of a bunch of wizards labelled 'Geomancers', really explores what it is like to be an immortal like no other title, I've read, and assume will do again, under the pen of Greg Pak. Every issue used have me thinking 'Man I wish DC would do more with Vandal Savage', now it looks like it will be a case of 'Vandal Savage who?'

Why is simple, the first issue kicks off with art by Trevor Hairsine (left), whose work on Ghost Rider for Marvel, let alone his recent X-O Manowar covers are still filed in the 'unbelieveable' section of my mind. He's exactly the right match for this series!