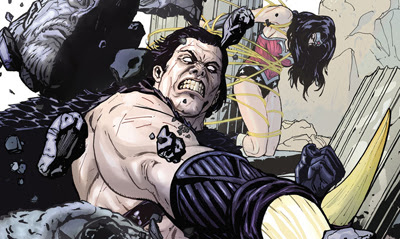 September is a dark month at DC Comics, literally. In the wake of the Trinity War conclusion, DC offers extra point editions to many of its titles, focusing on the company's biggest villains. Inheriting the earth in the first DC52 line-wide event, the covers to the Forever Evil issues will star their spotlighted foe in a massive 3D image! That said the best picks of the month are right here:

From Deadshot to Killer Frost, Black Manta to Cheetah, these 3D covers are both a nod to the cool cover gimmicks of the 90's and an exercise in wicked themselves. With all those chains flying, this cover really makes the most of that 3D feel with The Creeper!

DC says: Freed from his mystical prison, The Creeper walks a path littered with gore and misery--and there may be no way to stop him! Many will be caught in his web, including the Justice League of America's Katana and Jack Ryder, The Creeper's unwitting human host. Where will The Creeper strike next? 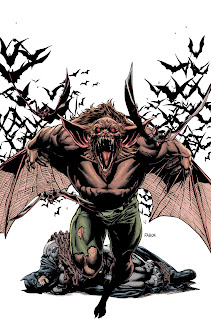 Sure you've got Bane, Riddler and The Joker, but how Man-Bat often gets left out of the great Bat-rouges is beyond me - he's a freakin' man-bat! A simple concept creates great villains - and if this image is anything to go by, the winged terror returns to the DC52 in ways no mere werewolf ever could. 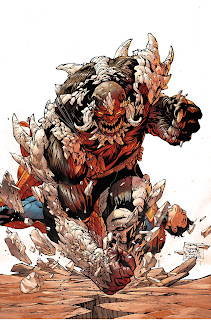 Batman/Superman #3.1
Before you start trying to figure out if Doomsday actually still killed Superman in the DC52 continuity, like he monumentally did in the old, here's a better question for you; Has Batman ever fought the creature? Sure he faced an army of Doomsday clones in Michael Turner's debut Supergirl story, but here he's up against the real McCoy! Place your bets!

Do you like the idea of gimmick covers making a return? What villian are you hoping to see step up? Sound off below. For DC's full September line-up, follow the jump!
Posted by IADW at 9:35 am