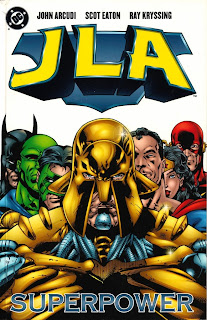 When folks in the real world get together and have a natter, you often hear something like 'If I had super-powers I would go to (insert war torn country here) and kill dictator (insert 6pm news promoted fiend here) before they can hurt anyone else.' With time travel easier to get in the DCU than decent mobile reception, Antheaus puts the question directly to Superman himself - would he kill Hitler to save thousands?

Who's Antheaus you ask? He's the guy looking to carry out the idea and he's just joined the Justice League to do it.

Masterfully scripted by writer John Arcudi, this thought-provoking tale focuses around Mark Antaeus, a young man whose ideals are inspired by the Man of Steel and who possesses the enhanced abilities to enforce them. That is until he pits himself against a burning building in the hopes of saving a trapped family, only to realise to his horror he is still all too human... 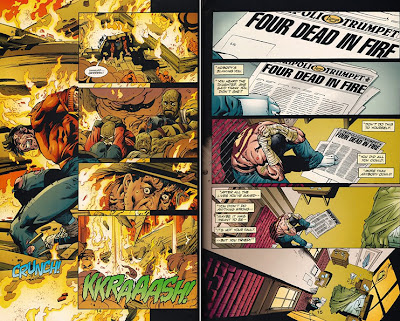 Taking the form of a guilt his broad shoulders can no longer handle, this realisation leads the physically and mentally broken hero to the one place capable of making him truly invincible; S.T.A.R. Labs. Stronger, faster and able to fly, Mark's new enhancements bring him into the ranks of the 'Big Seven' Justice League. With the S.T.A.R. Labs connection made, Green Lantern Kyle Rayner voices his reservations, that is until Batman steps in (I love this next panel)... 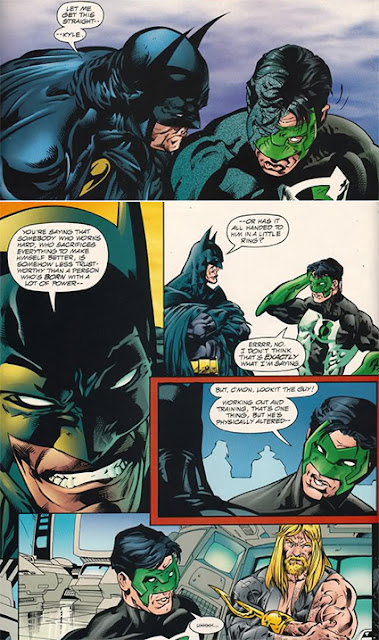 As the League stir the cerebral pot on what sort of person is best equipped to handle or wield power, Mark decides to fly solo to the war torn country of Kirai and end the atrocities he sees on the nightly news, by showing Superman the damages unfolding firsthand. Disappointed that Kal-El's 'intervention' in the war equates to Justice League delivered first aid and food parcels, Antheaus quits the team and heads out to dispose of President Mehtan himself.

Drawn by the dramatic and adrenaline fuelled pencils of artist Scott Eaton, Mark's divergence from the ideals of his former teammates turns physical as the two perspectives literally collide. Expanding on the question at the start of this article, the post-throwdown effects will show all no stone splashes in a pond without causing it's share of ripples. Ripple neither the League or Mark will be prepared for. 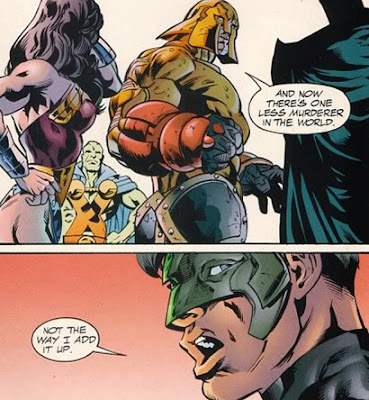 While ambassadors of state Wonder Woman and Aquaman don't quite get the relative showtime you'd think they would in a tale of this nature, JLA: Superpower pokes your cerebral grey matter with all the force of a nail-gun.

Superman, Batman, Kyle and Mark, you'll see things from each of their perspectives before the last page is turned and you are led into the pull-no punches conclusion. In fact Superman's parting words with Kyle will have you not only reevaluating the JLA-worthiness of the cosmic twenty-something himself, but also of every hero who has ever joined their ranks - including those of the current roster.