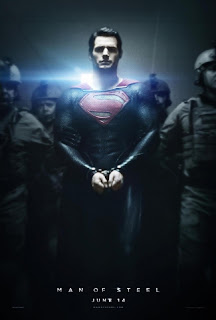 "…that gives us an evolutionary advantage. And if there's one thing that history teaches us, it's that evolution always wins."

(SPOILERS) General Zod's righthand woman, Faora-Ul was the nastiest piece of work in my pick-a-path Superman book as a kid, and now a handful of years on the Superman franchise may have evolved on many levels into Man of Steel, but as the above quote shows, Faora (Antje Traue) is still just as evil.

On the planet Krypton new lives are created to order, each imprinted at birth with what role they will fulfil in society. As their planet's destruction looms, new parents Lara Lor-Van (Ayelet Zurer) and husband Jor-El (Russell Crowe) decide to send their child, the first natural birth on the planet in years, into the stars. As he would be one of a kind amongst his own people, he will now be the last of his kind amongst another. An outcast. A God.

Only this God has the Krypton codex cursing through his veins, and having escaped from the Phantom Zone prison his rebellious actions had he and his forces exiled to, General Zod (Michael Shannon) brings his wraith to Earth to reclaim it. He offers the son of Jor-El, Kal-El one challenge; help give rise to a new Kypton built on the ashes of humanity or die in flames alongside it. Only when he looks for an answer, he finds a Superman standing in his way. 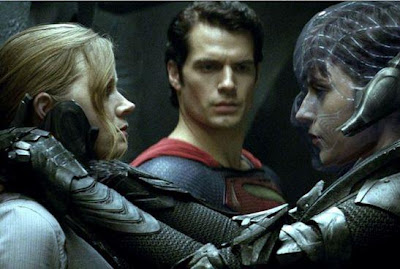 That said, tradition does not stand in the way of director Zack Snyder or writers David S Goyer and Christopher Nolan. The powerhouse Hollywood trio shake the Yahtzee glass frequently throughout this film, some gambles small, some big - and the payoffs just as varied.

The 'truth, justice and american way' of what goes right starts with casting Henry Cavill as Superman. Everything from his voice to his gaze scream 'Man of Steel' and only Laurence Fishburne's portrayal of Perry White comes close to being as perfect. The humorous almost slapstick elements of the iconic Reeves Superman are gone due to one restructure of continuity, yet Cavill still conveys that Clark is one of us with supernatural ease. Of course this is helped by the fact his purpose built super-bod makes him look like a Jim Lee drawing made flesh!

With much of the film based on Mark Waid and Leinil Francis Yu's incredible Superman: Birthright mini-series, the early school days and globe-trotting adventures of a nomadic Clark Kent as an angel on the road further humanise a character often accused of being too powerful. It also makes for a stark contrast against the opening scenes of a doomed planet that actually looked alien, futuristic and hostile.

Speaking of hostility, as scenes start to swap more rapidly in the second half, the battles that fill them are unbelievable. Almost too fast in places, Hollywood has finally delivered what a war between Superman and an army of his kin is capable of. In between the skyscraper levelling punches there are Easter Eggs a-plenty. In fact I'm pretty sure I caught signs of Lexcorp, Guardian, Wayne Enterprises and one of the best super-villains from the Dan Jurgens era, Conduit. 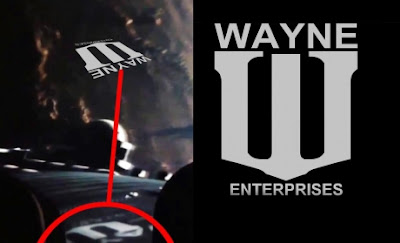 The swing votes for the film's success will be decided in the evolution of the classic love triangle between Lois Lane (Amy Adams), Superman and Clark, as well as on the twist of the film's final moments. I personally dig the new take on the world's most famous fictional couple. It's fresh, logical and sets up Lois as a whole character in her own right and as a respected journalist.

The 'twist' not so much. The Switzerland side of me can this setting up one of Clark's character defining beliefs, but after wrestling with it the whole walk home, I believe it would've already been firmly installed in him already by his human parents, Martha (Diane Lane) and Jonathan Kent (Kevin Costner), whose moral teachings and passive stances to violence we are well-treated to throughout the film.

Is the above enough to turn a film long overdue into a horrible one? No way in hell. Seeing the discovery and collision of two heritages within one man evolves Kal-El ready for long-term big-screen success. How about that? It seems Faora was right after all.