PANEL BEATER: My Comic Of The Month: Captain America #6 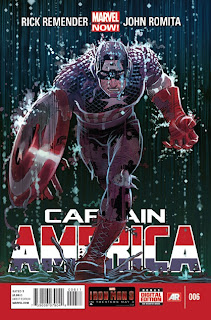 "This place -- it's become my normal. This is the life I lead now. The world I know."

Legends say "When Captain America throws his mighty shield, all those who chose to oppose that shield must yield" - well apparently 'those' also includes genres of storytelling.

Former Captain America series writer Ed Brubaker penned gold monthly with a "realistic" take on the world of Marvel espionage. So much so that you thought whoever wrote the book next would be on a career suicide gambit, just so Marvel could cut them short and herald a 'return to greatness' with a third creative team. Not so.

Writer Rick Remender has stepped in and like he did with Uncanny X-Force, taken a non-powered Cap and thrown him into a true sci-fi adventure. One complete with post-apocalytic dimensions, monsters, warrior woman and bleak odds of survival, all out to test how long Steve Rogers can hold on to his mantra to 'Always stand up'.

As we hit the sixth instalment of the initial arc, Cap has been trapped in Arnim Zola's genetic engineering testing ground of Dimension Z for 12 years now. In initially escaping Zola's stronghold, he's also 'rescued' Zola's son Ian and taken haven with the rebel natives, the Phrox.

With the Phrox now mutilated at the hands of Zola's mutates, Ian reclaimed by Arnim and Steve on his last legs due to manually removing a Zola screen from his own chest and going one-on-one with Zola's femme fatale daughter 'Jet', hopes for a victory grow slimmer with every step. Yet stand Steve still does. He raised Ian, and he's coming to take back his son. 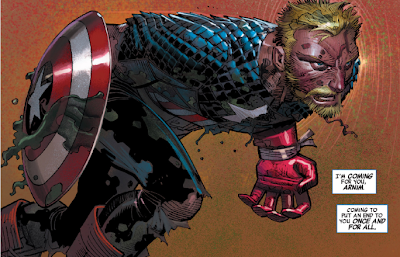 In Zola's citadel, Jet is made to question her father's mission due to witnessing Cap's compassion in battle. To hold power and not use it. Meanwhile as one lone man and a shield start breaking through her father's stronghold and his forces towards her, a captive Ian holds firm that Zola's massacre of the Phrox proves which of his fathers are just.

However, Zola working to decipher the super soldier serum, has decided the worst part of parenting is 'freewill' and decides to change Ian's mind the only way he knows how.

Three secret weapons take this stunning plot and send it intergalactic. One of them is Dean White. In the credits, he is listed for 'Colour Art', not 'Colourist' and nothing could be more fitting. The hues and shades he renders Zola's Dimension Z in are brilliantly eery, yet atmospheric. Even if there is no panel background, you still know this ain't earth you're reading about.

Secondly, the moment where on his rise into Zola's HQ, Cap spies the tunnel that brought him here and weighs up getting "whatever's left" of the Avengers to help or just to proceed solo. How he arrives at his answer both connects to his upbringing and speaks to the core of what makes Captain America such a timeless hero.

Lastly, is the artwork of John Romita Jnr. Daredevil, Punisher, Iron Man, X-Men, Spider-Man, Thor (a few trillion others in-between) and now Captain America, he is not only my favourite artist of all, he has become an artist that defines the Marvel look - as much as his father ever did before him. 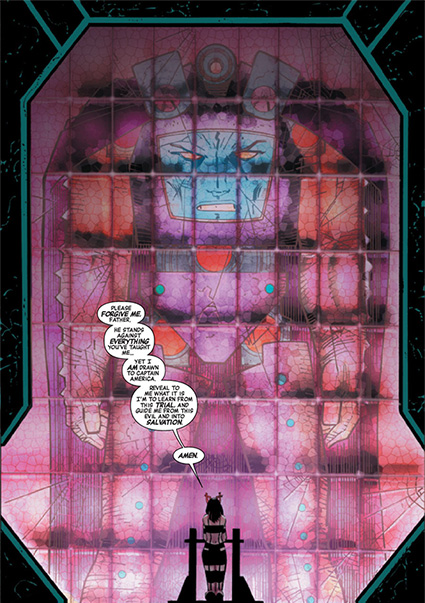 Better suited to solo character adventures, Cap allows John to pull in some of his Kick-Ass type styling - for when his Steve Rogers is beaten to a pulp, he actually has the face to show for it -then two panels later, the post apocalyptic setting is giving Romita.Jnr  an ability to showcase the imaginative side of his creative abilities, that are all to often looked over for applauding his realistic ones.

Captain America for my money is the best book of the Marvel NOW! generation. It's fresh for the shield slinger, dynamic in referencing his past and shows what a complete bastich a man with a chest-screen face can be to the universe around him. Seems hit runs can flow concurrently. Who would have thought?

What do you think? What was your comic of the month?
Posted by IADW at 12:18 pm