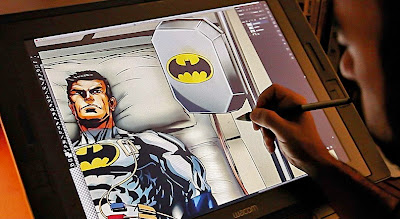 Cancer has to be the real world's worst super-villain. It's various guises and unforseen entry into so many lifes, make it a hard enough topic for adult minds to come to grips with, let alone a childs. Down in São Paulo, Brazil, one child's cancer centre has taken their patients perspective to heart and teamed up with DC Entertainment, to rebrand chemotherapy 'superformula'. Outfitting their wards in a Justice League theme, so the kids feel they are fighting 'the good fight' right alongside the world's greatest super-heroes.

Co-developed by the doctors of the A.C.Camargo Cancer Center, the facelift turned the unit's halls, entry and game room into 'The Hall of Justice' - right down to intravenous bag covers branded with the global icons of the League's biggest stars. Batman, Superman, Green Lantern or Wonder Woman, having these heroes over their shoulder, literally backing them up, would beat any depressing alternative for the youngsters involved. 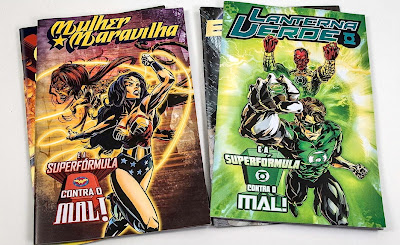 The special comic books above were also created, allowing the young patients the ability to escape into adventures where the four heroes lost their powers, but regained them after undergoing similar treatments. After reading about Green Lantern, a hero whose abilities are completely fueled by willpower, I wouldn't be surprised if the kids realised the willpower they've already shown and started feeling like a member of the League or the Green Lantern Corps themselves!

Put together by the mutual advertising agency of both the A.C.Camargo Cancer Center and Warner Bros. (DC's parent company), JWT, this project is not only a sensational branding idea with heart, it fundamentally justifies the importance of comics and their icons as escapist media (let alone anything else) in one hit.

What do you think?  For more photos of the redecorated children's center and details, click the jump.
Posted by IADW at 9:18 am