REWARD POSTED: The Guns Of Shadow Valley Brings The Wild West To Kickstarter

Back in September 2010, a free online comic that dared to mix the wild west with a dab of super-power bet out all other new releases to be my Comic of the Month. The Guns of Shadow Valley was it's name and between artist Dave Wachter's atmospheric pencils and writer Jim Clark's twist filled plot, it literally had great comics dead to rights. 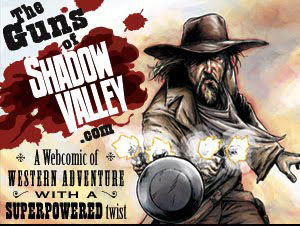 I wasn't the only one clapping over its existence either. The Guns of Shadow Valley was nominated for both Eisner and Harvey awards for excellence in digital publishing and gathered thousands of fans. Then the series just stopped. Riding off into the sunset way before it's time. Now however it's set to come back guns blazing, for one last showdown at the O.K. Corral - and it's a showdown you can help them fight.

To show fans how the story of The Guns of Shadow Valley ends, Wachter and Clark are turning to Kickstarter to rally the troops. Aiming to collect enough donations from comic fans across the globe to create an epic oversized hardcover, one collecting the existing material plus the long awaited, unpublished second-half of the tale. 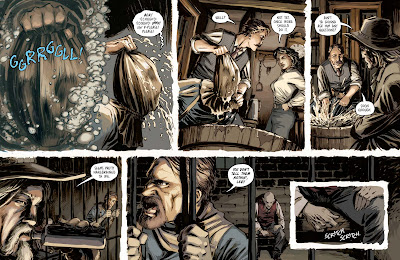 Already underway, readers craving a good old western tale have until July 15th to take part. Like all bounties worth their weight in gold, the rewards posted are just as attractive; readers can pre-order a signed and numbered copy of the hardcover edition for $30, plus T-shirts, original paintings, and even cameo appearances in the story.

The creative team have already reached their initial target in just a few days, but with your help they can reach even further and higher.


Described by Clark as "X-Men meets The Magnificent Seven" in its theme, if you would like to read the already existing chapters starring wanted gun-man Franklin 'Breakneck' Kelley and the town that wouldn't let him be, then you can do that right here. If you'd like to through a few gold coins the way of Clark and Wachter to see how the iron-fisted Colonel Bale finds his fate, then you can do just that here.

Your move pilgrim.
Posted by IADW at 7:56 am