SWEET AS: The Best From Image Comics' September 2013 Solicitations

When we Kiwis find something we like, we say it's "Sweet as". Formerly known as Cover Shots, I'm renaming these solicitation spots in the Kiwi slang, to spotlight more than great cover art - to highlight new series', where unsung great reads are and to help people looking for a change to experiment - myself included.

Wouldn't you know it, just as I decide to do this, Image Comics releases six new titles as part of their September 2013 solicitations... 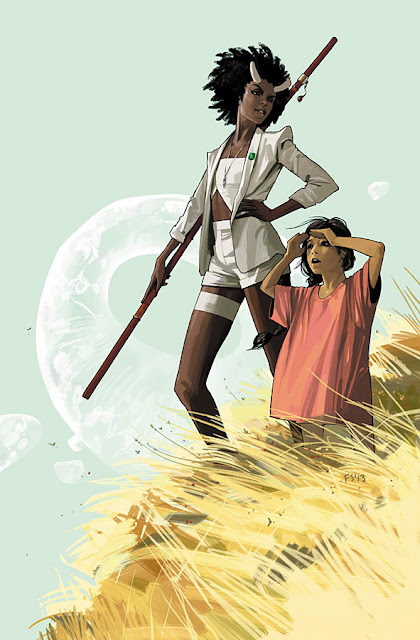 The third season of Saga is kicking off and Fiona Staples continues her tradition of sparse yet striking covers with this one, featuring Slave Girl and Gwendolyn. Before Christmas rolls around and all your money goes on others, do yourself a favour and pick up an issue of this book. It's better than adjectives. 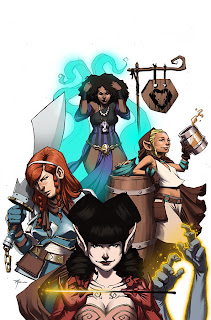 (W) Kurtis J. Wiebe (A) Roc Upchurch
"Gold, Guts and Grog," Part One. Who are the Rat Queens? A pack of booze-guzzling, death-dealing battle maidens-for-hire, and they're in the business of killing all gods' creatures for profit.

This Birds of Prey meets Lord of The Rings fantasy series could see Hannah the Rockabilly Elven Mage, Violet the Hipster Dwarven Fighter, Dee the Atheist Human Cleric and Betty the Hippy Hobbit Thief become this years break out stars!

Edward Zero is the perfect execution machine, a spy who breaks the rules to get things done. When a stolen device appears in the center of a long-running conflict, Zero comes to retrieve it. The problem is, the device is inside a living, breathing, bio-modified terrorist and there's an entire army after it.

SEX CRIMINALS #1
(W) Matt Fraction (A) Chip Zdarsky
A sex comedy for comics. Suzie's a normal girl with an extraordinary ability: when she has sex, she stops time. One night she meets John... who has the same gift. And so they do what any other sex-having, time-stopping, couple would do: they rob banks.

LOVE STORIES (TO DIE FOR) #1
(W) Dirk Manning (A) Owen Gieni and Rich Bonk
Two full-length stories in one double-length flip book! First, a desperate monk pits savage Vikings against rabid vampires to protect a precious child. Then, a woman trapped on an overrun space station must chose whether to save her aloof but heroic husband or her passionate, forbidden lover.

REALITY CHECK #1
(W) Glen Brunswick (A) Viktor Bogdanovic
Struggling artist, Willard Penn, creates a hit comic about a hero more concerned with his libido than serving justice. As the hero shows up outside Willard's window refusing to return to the comic until he finds true love, Willard soon learns the book's villain, a homicidal maniac, has entered his world too.

CENTURY WEST OGN
(W and A) Howard Chaykin
Century, Texas used to be a sleepy little burg, barely a whistlestop between nowhere and the great beyond...until the 20th Century arrived with a bang, bringing with it automobiles, aeroplanes, telephones, paved streets...and, of course, the movies. Howard Chaykin tells the colorful story of the American West, transformed from frontier to legend, and how the American dream became a modern myth.