SWEET AS: The Best From Marvel Comics' September 2013 Solicitations

When we Kiwis find something we like, we say it's "Sweet as". From Spider-Man 2099 to the revamp of Marvel's best Captain Marvel, when I'm looking at the best and new releases from Marvel Comics for September 2013, these comics here make the 'Sweet As' grade: 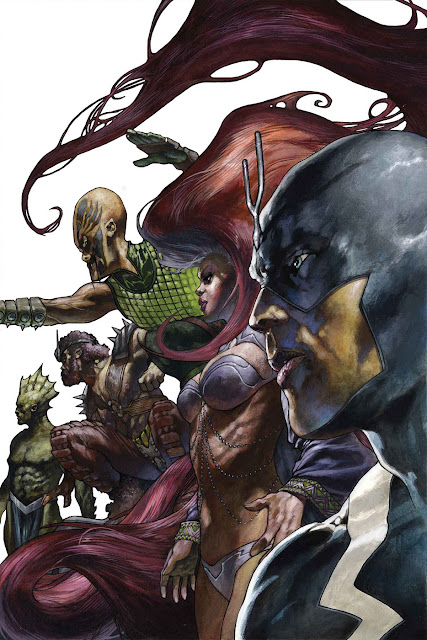 Quirky moon-based experiments The Inhumans come off looking exactly like that in this cover. Who ever opposes these guys better have their A-Game on...

THE HOT OUTSIDER:  A + X #12
(W) Christos Gage and Justin Jordan (A) Mike Deodato and TBD
Sure Beast seems to change in appearance from week to week, but celebrity superhero Wonder Man is a guy I think has been deserving of another solo title for some time now. Here he gets a decent leg up in that direction, side-by-side with his best mate, Beast! 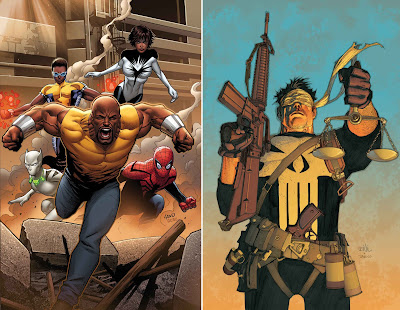 MIGHTY AVENGERS #1
(W) Al Ewing (A) Greg Land
With the Avengers off battling Thanos in space, Luke Cage assembles his own 'Mighty Avengers' to safeguard the earth in their absence! One of his picks, Monica Rambeau - the best Captain Marvel in Marvel - now called Spectrum. Between the two of them, you don't really need anyone else. Team sorted.

PUNISHER: TRIAL OF THE PUNISHER #1
(W) Marc Guggenheim (A) Leinil Yu.
Punisher drawn by Leinil Yu! How can anyone with eyes turn this down?

INFINITY: THE HUNT #1
(W) Matt Kindt (A) Steven Sanders
Hank Pym, Wolverine, and She-Hulk announce a new Contest of Champions pitting the super students of the Marvel U against each other. Until the forces of Thanos gatecrash that is.

INFINITY HEIST #1
(W) Frank Tieri (A) Al Barrionuevo
Spymaster and a few villainous mates decide to make opportunity out of Thanos's chaos event. Blizzard though is not so sure...

What do you think?  For Marvel's full September solicitations list, click the jump!
Posted by IADW at 12:15 pm