THE CLOWN PRINCE: E3 2013's Batman Arkham Origins Trailer And The Crowds Priceless Reaction To PS4 vs Xbox One 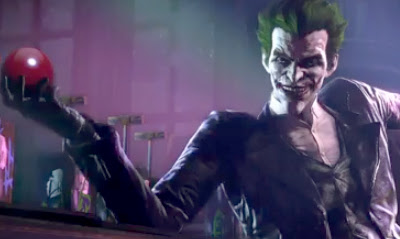 Had I had a ticket to E3 2013, I would've been like a kid in the backseat on the way to Disneyland. Except instead of bouncing up and down excitedly over visiting the world's number one Mickey Mouse outfit, I'd have been repeatedly saying "Is it Batman: Arkham Origins trailer time yet?" Yup, I'm that kind of annoying.

Sure, above that E3 was set to be the showdown of the next gen platforms, Xbox One and Playstation 4, but as this comparative vid shows, with price revealed, one party came off looking like The Joker...

Yeah, boo's while onstage do lead to the odd "We will start over". At least that kind of reaction can't happen at Comic Con - or can it? But I digress, at the risk of annoying my inner backseat child, get your Deathstroke ready, it's Batman: Arkham Origins trailer time.

"Luckily there ain't a problem in the world that can't be solved with a little bit of money." Deadshot, Joker, Bane, Black Mask... looks like the best just keeps getting better.