The highly hyped Comic 'Con 2013 is currently raging in San Diego, and as it's accelerating through crowds of fans, cosplayers and displays, these are four of the hottest things seen so far:

1) SUICIDERS ARTWORK BY LEE BERMEJO
Suiciders was recently announced as one of the revitalised Vertigo books. Marking artist Lee Bermejo's debut pulling double-shift as a writer, it was one of the books in the announcement that didn't feature preview art. Well, until now. Click to enlarge this wee beastie; 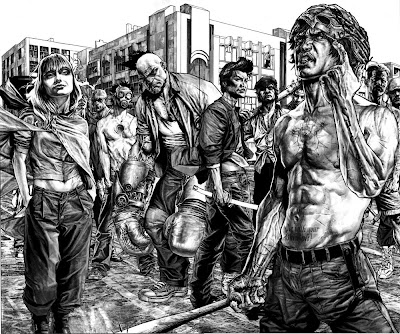 Looks like the ultimate reality sport, where to be the best you have to murder the best, now has the ultimate 'reality' artist. Hot!

2) WALKING DEAD SEASON 4 TRAILER
Speaking of 'survival' Walking Dead, the TV series based on a non-'Big Two' company title is about to hit its fourth season. How 'bout that? The debut trailer for which can be seen right here; 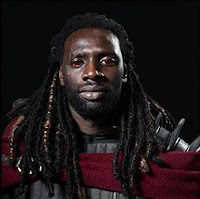 3) BISHOP REVEALED
You can't have a time-travelling X-Men arc without Bishop or Cable. It's a 'Marvel Zombies 10 Commandment'. Proving they aren't blasphemous, Fox has released this shot of actor Omar Sy as Bishop, for the upcoming flick X-Men: Days of Future Past. Reminds me of how Georges Jeanty drew him in the Bishop: The Last X-Man comic!