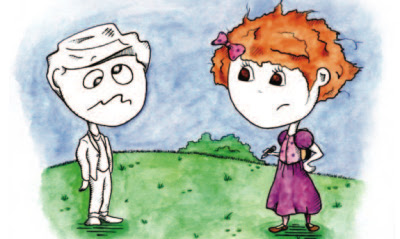 For hundreds of comic bloggers Matt Bergin is like the guy on Mission Impossible whose messages end in 'This tape will self-destruct in five seconds'. By creating the Comic Blog Elite, Matt has connected 'agents' the world over, keeping us updated on things that may be of interest.

Now he's stepping out into the spotlight with his e-picture book Blank Slater, The Boy With The Dry Erase Face. A tale of one boy's quest to find his place in a world he doesn't ressemble, it is a pretty special read. IADW grabbed Matt and flicked a few questions his way, to find out the why and how of it all.


IADW) Like any picture book worth it's salt, much hinges on the artwork. How did it feel seeing artist Zach Wideman bring emotion to a concept you first created back in college?

Matt Bergin) For a long time, I was going to illustrate this book myself, but I was never completely satisfied with how I drew the character. My Blank was always this South Parky, Charlie Brown-looking eggheaded character...kind of pathetic and ugly, which also made him unsympathetic.

When I decided it was time to put up and pay up, time to find an artist to see this project to completion, I had accepted the fact that it would be someone just doing their version of my sorry little egghead. But what Zach did was recast this character I had been living with and thinking about for over a decade. 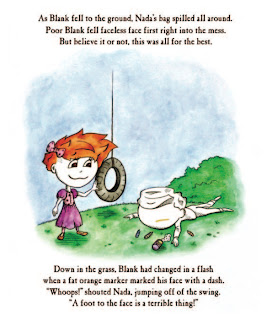 That is the difference between a professional artist and a guy who draws okay. I immediately fell in love with Zach's take on Blank (and Nada). It was more than just bringing emotion to my concept. Zach made it real.

IADW) Speaking of the upbeat and friendly Nada Trace, her personality reminded me of Death from Sandman. As she is the pivot that rotates Blank's perspective, I have to ask who is an inspirational figure that has influenced your perspective?

MB) Nada as Death...that's not something I ever considered. I may have to reread my own book with that new perspective. Honestly, from the very first draft of this story, Nada arrived fully formed. I don't know that she was inspired by any one person in particular so much as she was the amalgam of many strong-willed, creative women in my life, and she represented the kind of free-spirited, creative, adventurous, tolerant, and world-embracing person I wanted my audience (my daughter) to emulate.


IADW) One of the most inspirational books ever is Dr Seuss's Oh The Places You'll Go. I can imagine it is hard to mix a rhyming structure and an underlying message without seeming like a Seuss clone, yet Blank Slater does this effortlessly. Was it important that the boy with no face had his own voice?

MB) "Effortlessly" is not a word I would use to describe my book. I am so happy you can't see the strings or track the years of revision and rethinking that went into getting Blank to this alleged effortless state of message and rhyme. There was actually a point, based on potential agent and publisher advice (agents and publishers that never panned out, mind you), where I removed all rhyme from the story, because in the psychotically subjective world of children's publishing (all publishing is psychotic and subjective, I think), rhyming verse is not in style.

I hated it, and it certainly didn't get me any further with those agents or publishers who recommended it, so when I decided to self-publish, I also decided to write it how I felt it should be instead of based on subjective trends. But even then, I was tweaking sentence structure, art direction, and even page flow right up to the moment I hit submit on Amazon Kindle Direct. Effortless--ha!

IADW) Few have done for comic fandom what you have in creating the Comic Blog Elite. With comics full of characters struggling with identity, what made you flip that passion and create an all-ages friendly picture e-book like Blank Slater?

MB) Thank you for this very generous suggestion about the CBE. I actually started the Comic Blog Elite at my brother's recommendation. He knew I was struggling to find my footing in comics and had himself cracked a particular networking nut with his own toplist in a separate field -- nature writing.

He knew my frustration trying to connect with "the industry" and, at the time, in trying to promote my book Division 18: The Union of Novelty Costumed Performers. My artist partner on D18, Jeremy Donelson, and I had to resort to literally cold-calling comic shops around the country and spamming message boards to ask that people consider ordering our book. We had no marketing budget or PR plan, and we certainly didn't have anything like the Comic Blog Elite, where we could refine our hunt for potential reviewers and supporters of the book, or where we could ask a central arbiter of information (me, in the case of the CBE) to blast a note about the book to 400+ potentially interested comic bloggers eager for content and their own sense of connectivity.

Selfishly, I knew the CBE would help me in the future (see this interview, for example... achieved by asking that 400+ blogger network if anyone was interested in seeing my new book). But I also really liked the idea of giving something for nothing, providing this really simple thing--a link dump, essentially--that might help others feeling frustrated or disconnected like I did.

My other site, Comics Cure, was another attempt to transcend the usual PR clutter and self-promotional chatter of the comics web by fostering that sense of something-for-nothing community and connection. It is less a blog than it is a call to action. It never really caught on like I hoped. That said, I have seen a pretty big increase in coverage of charitable efforts around the comic and geek community since starting Comics Cure. I didn't plant the seed, but I hope I helped nourish it with a little digital sunshine. 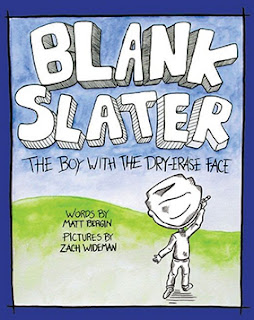 But this was a question about Blank Slater, right!? Okay...I think Blank Slater evolved from my own struggles with identity and trying to find my place -- creatively. This desire to bring people together while also continuing to figure out my creative purpose. Even this notion of jumping genres, from writing comics to picture books, is part of that ongoing quest to find a voice, an audience, and an accepting creative community.

I also had kids, and really nothing helps refocus one's creative energy or help one find an audience like creating an audience. Like in the biblical sense. I dedicated Blank Slater, The Boy With The Dry-Erase Face to my oldest daughter, Alexa Sky, because she has been my target audience since the day she was born.

The reason I went e-picture book over traditional comic is a combination of what was right for the story, what I could afford as a self-publishing creator, and where my creative interests lie at the moment. Comics is a tough racket, and while I am wholly invested as a fanboy and...community cultivator...I don't know if I have the will or stamina to continue banging my head against the industry walls to break in as a comic creator.

Picture books have the same opportunities for visual storytelling that I love, they are targeted to the audience I am interested in (my kids), and there's something very satisfying about getting a child or a parent or even a teacher to light up over your story that I probably couldn't experience in comics. The reading of a comic isusually a private, quiet experience, while picture books are usually meant to be shared. 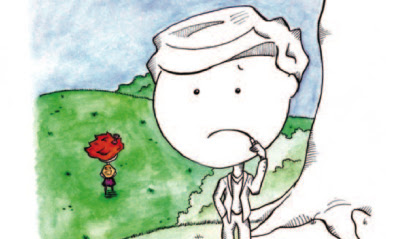 IADW) Now that Blank Slater, The Boy With The Dry-Erase Face has met his Kickstarter goals and is available on the Amazon Kindle Store, is Blank's future becoming more detailed than you initially thought it would be?

MB) I am very happy that self-publishing options exist, especially at the quality and caliber of Amazon Kindle Direct Publishing, Comixology Submit, and Graphicly. I will expand the e-scope of Blank through Graphicly in the Fall. I've also partnered with a local vanity press publisher, GP's Honey Tomes, to release a small print run of the book to be sold alongside other Honey Tomes titles at schools and other places I wouldn't normally have reach.

Honey Tomes puts out a series of "wellness" books -- meaning books about issues of physical, mental, and emotional wellness, written with educational and therapeutic ends in mind. There is some pretty obvious application of Blank Slater in these areas, be it for early childhood development (identifying features and feelings, encouraging creative expression, establishing identity) or for helping older readers work through emotional connectivity issues, post-traumatic stress, or difficulties related to placement on the autism spectrum via this relatably disconnected character.

When you read the story you will see, there is no quick fix or easy solution Blank has to find his way, work hard to get it right, and, even then, continue working after the story is over. There's something positive and hopefuly there (I hope) for people living through very serious circumstances to latch onto. So yes, I definitely think Blank has a bigger future than originally conceived. I would be content with Blank thriving mainly in the digital realm, but I would love to see the book make it into some curriculum or find its way onto the shelves of a few bookstores and libraries, or just help some relatable kids find their own faces.

What do you think?  I have to thank Matt for his time in doing this interview, he was great, and really gave a lot of insight into his fantastic projects. If you are hanging to read Blank Slater, The Boy With The Dry-Erase Face for yourself, click to grab your copy now!
Posted by IADW at 12:04 pm