Sometimes It's A Dan's World surprises even me. Earlier this month I listed my picks from Marvel Comics' October 2013 solicitations, with Ron Garney's amazing cover to Thor: God of Thunder #14 as the best of the bunch. Low and behold, who else would get in contact with me about the post than Ron Garney himself!

Ron said Marvel can release unfinished artwork in their desire to give retailers the most info on the comics they're ordering, but that can be a little hard when it's not the finished version the artist wants the world to see. He asked if I could swap the old for the new, and really, when a living legend asks, how can you say no? Here is the final product; 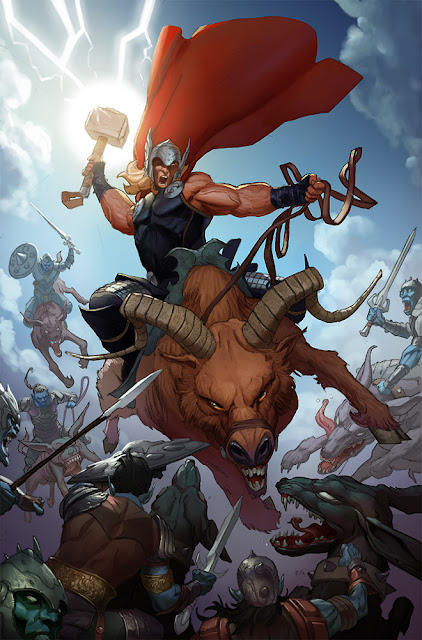 If you thought the old one was good enough for your walls, you'll completely deck the house out with it now! Look at those colours by Ives Svorcina! Thor's arms are more detailed, the hues really convey a coming storm, and that beasts eyes glow right off the page!

Thanks again Ron for getting in touch and helping me to really give this cover its due!