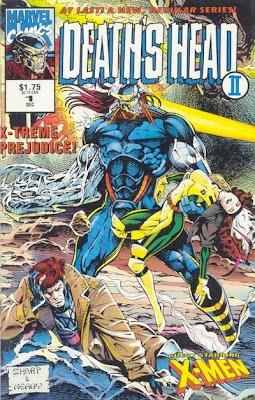 One of the best things about collecting comics in New Zealand in the 80's and 90's was that we got equal exposure to the exploits of Marvel US and UK. While for me the Marvel UK flagship title will always be their Transformers comics, with Grimlock and Soundwave answering readers' letters, the following standard-sized comics that aimed to bring some 2000AD flavoured cyberpunk to the wider Marvel line wouldn't be that far behind in the coolness stakes.

Now, as other publishers continue to push the same icons, a key force in reinvigorating the Marvel Cosmic line, writer Andy Lanning, switches to dusting off the edgy UK creations that gave him one of his earliest breaks in Revolutionary War. A new reader friendly mini-series, co-written by Alan Cowsill, that will see the line's most familiar faces respond to an S.O.S. from M1:13 and S.H.I.E.L.D., as they go up against a secret organisation planning to spark a mass revolution across the UK and possibly the globe.

Meaning Warheads, Knights of Pendragon, Digitek, Death’s Head II, Dark Angel, Super Soldiers, Motormouth and Killpower - many robotic heroes with massive guns - will get to stand side by side with mainstream Marvel's most famous UK characters, like Captain Britain, Union Jack and Pete Wisdom.

For myself as a fan, this is fantastic news. Not only is cyberpunk a sadly under-represented genre in modern comics, but Marvel UK originally fell due to financial issues not a lack of creativity and it deserves to return.

The idea of a tale that mixes S.H.I.E.L.D. (and hopefully to that extent the original Nick Fury) and perhaps the likes of Muir Island, the Excalibur team and Marvel US cyber-cool folk like Deathlok, in with the die-hards who battled Mys-Tech (tech wizards who sold their souls to Mephisto for immortality, then tried to find an escape clause) means January 2014 already has one cyber-solid hit to it's name.