IT'S A LOCKJAW: Marvel Cements Joe Madureira As Artist For Inhuman

When it comes to yesterday's news of Marvel's upcoming Inhumanity event, the only thing wrong with saying to the House of Ideas 'Put your money where your mouth is' is that Black Bolt doesn't speak. Still though, Marvel has, announcing the events central ongoing title Inhuman will debut in December drawn by Joe Madureira. Here's his cover to issue one, courtesy of EW.com 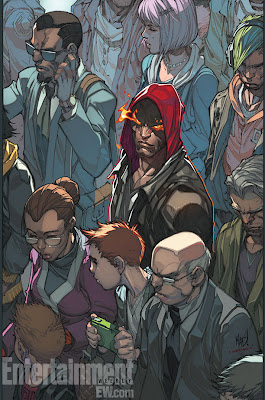 While that image has a bit of a Valiant Harbinger cover feel to it, as a fan I can't believe an often neglected Lee/Kirby creation(s) like the Inhumans is getting an ongoing with both a massive media push, and an A-game creative team like Joe Mad and writer Matt Fraction.

Mr Mad is the perfect choice for this tale of identity and isolation as well. The unusual powers of the Inhumans (both old and the new created by the re-released, gene-activating Terrigen Mists will really be at home under his manga-ish pencils. Plus as a fan of video games like Final Fantasy, the global nature of what Matt has planned will put him right at home in a way his X-Men work never did, because we all know few have a better range of locations than the Marvel U.