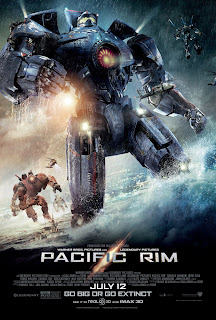 "They counted on the humans to hide, to give up, to fail. They never considered our ability to stand, to endure. That we'd rise to the challenge"

I wasn't going to see this. I just felt director Guillermo del Toro's love letter to the anime and tokusatu of his youth was pitching a little younger than I was. However as I strapped myself into a viewing at my best mate's request, it wasn't long before we too were in a 'drift', seeing eye to eye on how awesome and deadly a manga sized robots vs monsters film can truly be.

While mankind was looking to the stars for hostile races, the Kaiju rose from beneath our feet. Massive destructive beasts repeatedly unleashed from a dimensional rift, deep in the heart of the Pacific Ocean. Mankind's answer becomes to create 'monsters' of our own; giant weaponised robots called Jaegers. Powered by two pilots who can share minds and 'drift' as one, it seemed like victory would be ours. 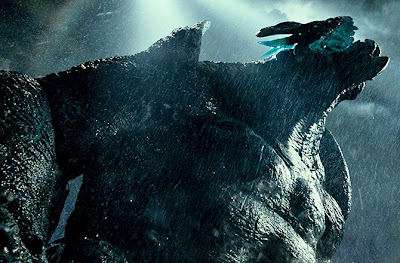 Fourteen years on Raleigh Becket (Charlie Hunnam) is isolating his emotions in steel and metal - building walls in every way. He co-piloted 'Gypsy Danger', the first Jaeger to fall as the Kaiju begin to evolve in size, strength and brutality. Sharing his mind with his brother at the time, Raleigh lives having seen death through his own blood's eyes.

Now as mankind's faith in the Jaegers stands shaken and a time limit is put on the program before all funds turn to building defensive walls around the Pacific, like the one Raleigh is helping to construct, he is re-recruited by Stacker Pentecost (Idris Elba), to lead the remaining four Jaegers in one last suicide gambit against the alien threat.

Raleigh's new co-pilot is Mako (Rinko Kikuchi), a lady whose past threatens to bring the house down, as her relationship with Pentecost is laid bare. Luckily Dr Gottlieb's (Burn Gorman) scientific partner Dr Newton Geiszler (Charlie Day) has an idea. Only the sole source of what it requires to succeed is black marketeer Hannibal Chau (Ron Perlman), and Hannibal always has a price in store. For a Sons of Anarchy nut, seeing Hunnam and Pearlman together in such an imaginative setting takes a bit of eye-rubbing, but Charlie rides into action in a huge robot, just as well as he does on a motorcycle, proving more action films will feature in his versatile future after this.

Balancing the themes of fear and family legacy are Pacific Rim's obvious extremes. Brilliantly measured by talented hands, the film's scale, dazzling special effects and furious battles never move so quick or jump the plot so far you lose track of what is going on. It's this precise control by del Toro that sees small aspects, like the film's neon pop colour palette used to contrast the giant metallic creatures and their monstrous adversaries, not left to run rampant like the Joel Schumacher Batman film on acid that it could've easily become. 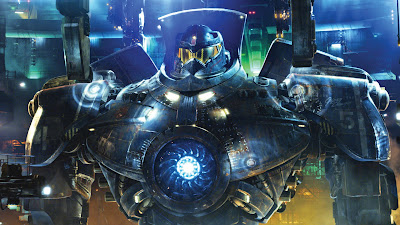 Not to be outdone, Travis Beacham's story consistently up's the stakes through a surprising number of plot twists, keeping Pacific Rim audiences on the edge of their seat, rather than watching 131 minutes of repetitive battles. Unlike many films of this world-ending nature, the planet's 'global' response is actually more than just American, with Jaeger suits responding from Australia, China and the Ukraine.

Sure the dialogue won't win Oscars, but with the style of movie this film is homaging, it wouldn't be right if it did. Pacific Rim is an original concept of the sci-fi genre and Guillermo's passion confidently knits together all its individual aspects (aided by a great soundtrack beat titled Drift by RZA and Blake Pearlman) so you get to sit back and enjoy the beats (both physical and musical), and the enormity of the action, fun and imagination involved.

Those characteristics are why Pacific Rim is one of the best movie experiences I have had in all too long a time. More than 'Iron Man vs Fing Fang Foom', it is damn good watching and there is nothing - be you human or Kaiju - that is age-restrictive on that.