She went from being the DCU's insanely funny, lovestruck lass of The Joker, to the more independant and wild vixen of the DC52's Suicide Squad. Now, real-life husband and wife creative duo, Jimmy Palmiotti and Amanda Conner will split the deck as co-writers, to truly define the fans 'Queen of Hearts' in a new Harley Quinn ongoing series. 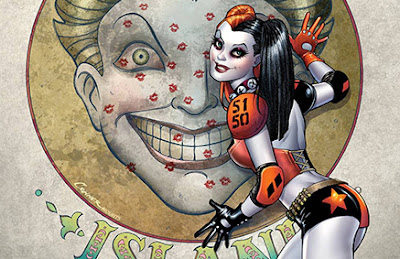 While the news broken on CBR did not state who would be the series' artist, when it debuts later this year, I think all of fandom is lamenting Amanda not being announced in that role (at least on an intermittent basis). Her fun loving and expressive pencils would have been a brilliant fit for the character, even if Quinn is no longer in her classic Batman: Animated based (and Amanda Conner perfect match) costume. Still, the book will tease us with her covers.

Moving the controversial homicidal maniac out of Gotham isn't all the Power Girl pairing have planned. Speaking on his wife's idea to keep Harley's costume roller derby-ish and versatile so it can be fun for cosplayers, Jimmy states;

"Having so many personalities how can anyone imagine she would wear just one thing. Amanda has a great gift of creating costumes that you can actually wear in real life. A lot of designs these days are so over the top, they just aren't realistic on any level for a character to fight or even sit on the toilet with them. Yeah, I said sit on the toilet. What do you think happens when the characters are not fighting bad guys? There is a lot of house cleaning, food eating, pet cleanup and bathroom time. Yes…we will be exploring all of these things."

What do you think?  For the full interview, click here.
Posted by IADW at 8:32 am