The X-Men's Doom Patrol of sorts, X-Force is headed to the big-screen, further expanding upon Fox's rights to the mutant side of Marvel. Spearheaded by the film's writer, Jeff Wadlow and Fox's comic creative consultant, Mark Millar, the latter has recently remarked to Slashfilm that the roster for the on-screen incarnation stands at five. 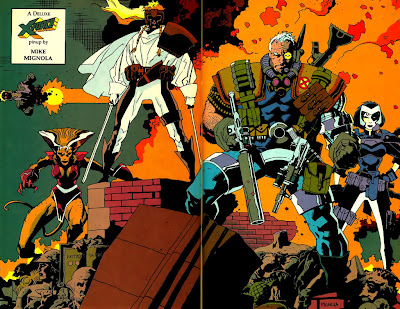 The only trouble with five members, is the cult comic has had just as many incarnations. The New Mutants who evolved into the originals, the nomadic purple and yellow crew, Mike Allred's indie group, Wolverine's first team, and the hit Uncanny X-Force bunch. And that's just for starters - more are listed in between the cracks!

While I pray they don't oversaturate the X-films with Wolverine and give Hugh Jackman a miss, I'm thinking the five bullets in the studio's chamber will be Cable, Domino, Cannonball, Psylocke and Deadpool (the last two, setting right events in X-Men: The Last Stand and X-Men Origins: Wolverine respectively).

Putting the studio picks in the holster, here are my cast and plot choices, should I become 'Mega-big Kahuna' on the X-Force movie;

CABLE - Stephen Lang Anyone doing X-Force without Cable is a buttmunch and Mark Millar is no buttmunch. If you've watched Avatar, you will have seen Stephen Lang's amazing audition for the role of post-apocalyptic futuristic mutie, playing Colonel Miles Quaritch.

DOMINO - Lena Headey I'd love Rebecca Romijn revived as Mystique, but the femme fatale of X-Force has to be Domino. In 300, Dredd and Terminator: The Sarah Connor Chronicles, Lena combined beauty and power, and would again as Cable's most trusted lieutenant.

DANI MOONSTAR - Rosario Dawson Pick New Mutants or leave them for their own film? With Sunspot (and X-Forcer Warpath) already cast for Days of Future Past, I'm grabbing archer Dani Moonstar. Rosario stole hearts in Sin City, her uncle is comic artist Gustavo Vazquez, and she co-created the comic Occult Crimes Taskforce. Add to that her grandmother is Apache / Seminole and you'll see she has the right mix of fandom and ancestry to play the Cheyenne illusionist with respect.

RICTOR - Jensen Ackles While his boyfriend Shatterstar is more of an iconic X-Forcer, Rictor clicks more naturally for me in a 'debut line-up' sense. Another former New Mutant, he suits Jensen Ackles (Batman: Under The Red Hood, Supernatural and Dark Angel), an actor known for shaking things up with his acting prowess. As for Rictor's BF BFF Shatterstar, freeing slave's on the Hunger Games-ish Mojo World (of which 'Star was originally one) would make for a pretty awesome sequel.

ARCHANGEL - Ben Foster In salvaging as much good as possible from X-Men: The Last Stand, having Ben reprise his role as Warren Worthington's apocalyptic transformation, would play to the diversity of the man behind The Punisher's Spacker Dave, giving him all new metallic wings to fly with.

THE PLOT:  Following Days of Future Past, the world is more volatile than ever. The animal kingdom has delivered an unstoppable 'legacy virus', and news tells of a South American shaman punishing tribes who do not join his search with starvation. In Asia a similar hunt through ancient grounds is leading various clans to civil war, and all the while in Egypt, a former slave is rising in the desert.

Time-sliding to the present, Cable knows Apocalypse is responsible - and what he is after. Seeking to evolve even further, he seeks the Egg of the Phoenix, lost to the winds as Jean Grey died. To confront the 'God', Cable recruits a woman whose powers grow stronger in fear, a man for whom the earth moves and a woman with the probabilty to twist the extreme odds in their favour. As this 'X-Force' battles the Horsemen of the Apocalypse, Cable knows, if they can't sway the mind of winged death where a noble man once stood, his mother may never be reborn, and his future, let alone his own life may end before it has even begun.

What do you think?  Who would make your five folk X-Force line-up? Feral, Fantomex, Boomer, Sabretooth and Maverick maybe? Let me know!
Posted by IADW at 8:00 am