We've all been there. Walked into a bathroom or changing room where a previous occupant has filled the air with so much deodorant you can barely breathe. For some, the un-thoughtfulness drives the victim into a Hulk like rage, others who like the smell take an upbeat Jubilee approach and every now and then you get a comic fan smirking - wondering what powers their own 'Terrigen Mist' has bestowed upon them - should they survive. 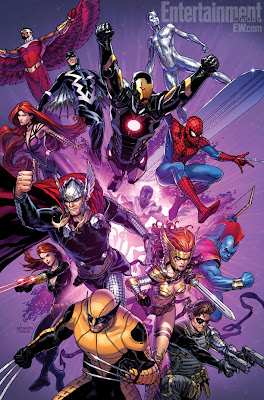 After all, the royal family of the Inhumans were given their fantastic powers by similar (albeit extraterrestrial) experimentation, who's to say the rest of Earth won't eventually be treated the same? Well they will, this December.

Following current Marvel event Infinity, Inhumanity will launch, centred around a new ongoing title Inhuman, written by Matt Fraction. Starring Black Bolt, his shattered royal family, and thanks to a re-release of the Terrigen Mists on Earth, potentially a whole host of new characters, average Joes turned more-than-average-Joes by the activation of their own dormant Inhuman cells, taking sides.

Revealed on EW.com, the sci-fi tale of alienation and 'coming out' will effect a number of other Marvel stars, many of whom are highlighted in the promotional art above, drawn by Steve McNiven. Upcoming Marvel movie stars Winter Soldier, Yondu and Falcon feature prominently alongside Silver Surfer and Thor - and could that be the return of the original Nightcrawler in the background?! God I hope so.