ON THE FIVE: Interviewing Livio Ramondelli

Walk into a comic store and one thing hits you square between the eyes. A bunch of stunning Transformers comics by IDW, that actually make the popular warriors look like robots at war. Weathered and wicked, the art gives the franchise more life than any 'live-action' movie has dared to do. The artist responsible? Livio Ramondelli.

While you'd think someone so talented would be a complete tool as a person (because to have it all would be unfair), Livio is anything but. Friendly, down to earth and humble, IADW sat him down for his thoughts on acclaim, inspirations and why it never rains on Cybertron.

IADW) You've studied hard to get qualifications in art, but was there a moment that inspired you to make illustration your career?

Livio) Certainly I was a big comic book fan growing up. I read Spider-Man, Hulk, Batman, etc. The original G1 Transformers cartoon was also a huge inspiration, especially the movie. It's really an amazingly detailed movie. The Dark Knight Returns blew my mind when I read it in High School, and it still remains my favorite comic series of all time.

The Empire Strikes Back is my favorite movie. It's so much more than just one of the Star Wars films..it really does stand on a completely different level in everything from its cinematography to its storytelling depth. All of these things sort of blended together and made me want to be an illustrator. And to this day, I'm constantly looking back on them and learning new things. 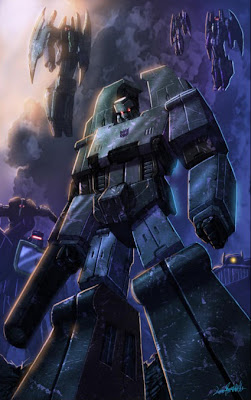 IADW) Through IDW titles such as Autocracy and your own galleries, you have become my definitive Transformers artist. How does it feel to be so closely associated with one of pop's biggest franchises, and what do you try to bring through art to the world of Cybertron and it's cast?

Livio) Well, thanks a lot for the kind words. It really means a lot. I really just try to draw these characters as well as I can, since they mean so much to me. Going back to my childhood, I've always felt a lot of love for this universe. Optimus Prime is, for my money, one of the best characters ever created. It's an honor to get to draw him.

With my work, I just try to create a realistic looking world for them to inhabit. I want these robots to feel old and weathered, and the world around them to feel lived in. I love doing wide cityscape shots that really show off the planet. I'm a huge science-fiction fan, and so it's a blast getting to play in this world. And I'm very thankful to be associated with it. Hopefully it inspires more people down the line so we can keep these characters and their world going forever. 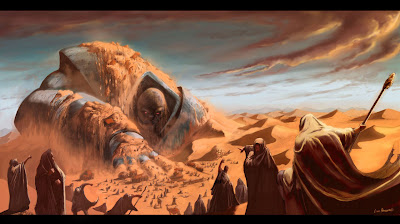 IADW) Robots aren't your only strong suit. You have digitally painted concept art for DC based video games and this site is littered with posts astonished at your takes on everyone from Darth Vader to the Silver Surfer. Your image of Apocalypse rising in the desert took one of Marvel's big villains and presented him in a whole new way.

With that in mind is there a particular approach or angle you look for in a subject that creates your take on them?

Thanks! And thanks to everyone for the comments, I really appreciate that. I usually try to think up more of a story rather than just an image. Like, I'm not aiming to do a pinup with these paintings..I want it to be a glimpse of an overall story.

With the Apocalypse image, it's meant to be him rising up from the desert after a long hibernation. Destroying a village as he rises. I wanted to portray him as an elemental force, the kind of nightmare that really would make people realize they're seeing another kind of being and not just a typical 'supervillain'.

I have another image of Magneto using the remains of a Sentinel as a chariot. I try to stick with the core of who these characters are, and create a scene around them that really shows off their personality and what they stand for.

IADW) IDW has an amazing range of titles on the go. Are there any that you look at on the shelves beside your work and think 'I'd like to draw that book one day'? I imagine your Mega City One would really be something...

Thanks! And yeah, Judge Dredd would probably be my ideal choice. I certainly love that universe, and the last film was amazing. I loved it. I would certainly say yes to drawing a Judge Dredd comic. It's definitely my kind of world. One thing we can never really do on Cybertron is show rain (There's no reason for it), and it's always been an atmospheric touch I wanted to throw in my work from time to time. And it rains in Mega City One!

Also, I was a big Ninja Turtles fan as I kid and it would be fun to draw those guys. The same goes for someone like Cobra Commader, who is such an iconic villain. I'd love to get to do just a couple covers in these other worlds. 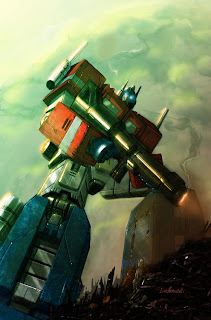 Fictionally, Optimus Prime is probably my favorite hero. He's such a great mix of compassion and strength. Really, the ideal sort of leader. In real life it's probably my Dad. It's a cliché answer, but the older I get the more I really appreciate how hard he worked to be able to allow his kids a future with options.

He came over from Italy as a young boy and became a surgeon through his own sheer will and intellect. It wasn't a generation where you could become, say, an artist and hope to make a viable living. But his hard work lead my brother and I both to be able to have more freedom in our lives and really follow our dreams. It's hard not to consider the guy a hero for that. I hope I can do that for my kids one day as well.

What do you think?  See what I mean? Talking with Livio was great fun, as a giant fan of the Transformers myself, it was sweet to hear how much Optimus and his world(s) truly mean to him - and you can see it on the page!

To see Livio's Transformer art from IDW, haunt your local comic store. Autocracy and Monstrosity are already out - and they are brilliant, but you can also catch him in the monthly series Transformers: Robots In Disguise. Thanks Livio!
Posted by IADW at 9:00 am