SALES PITCH: The Top Selling Comics of June 2013 and Junes Past

With the number crunchers at Diamond Comic Distributors having crunched the figures for June 2013, the Top 6 selling comics oddly enough resembled sales charts that your average non-comic fan would kind of expect. Massive global icons Superman and Batman star in four books including the top three. Despite the monopoly of the two capes, Marvel held the lead in unit share by 6.26%. 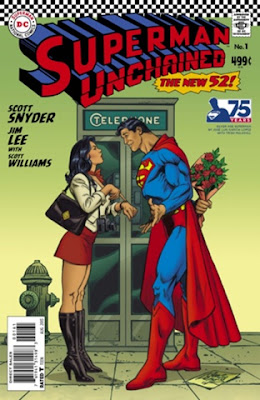 MY THOUGHTS: The new DC52 Superman relaunch that should've been has actually arrived. Having a hit movie helps, but drawn by Jae Lee, Batman/ Superman does a brilliant job at comparing the two heroes in all-new ways - track it down if you haven't already!

Age of Ultron hasn't really had the push of your usual Marvel event, but you have to hand it to the human race hating robot, his book hasn't stepped out side the Top 10 right to it's tenth issue!

Sure it's got that Wolverine in it, partnered with The Invisible Woman, but in a tale based on the legacy of founding Avenger Hank Pym, it ain't doing too bad!

THE #1 SELLING COMIC OF JUNES PAST:

The actions of Doctor Light divided the Justice League and fans in 2004 with Identity Crisis #1. Jim Lee drew Bruce Wayne vs Ra's al Ghul in 2003's Batman #616, and not to be out done, Joe Mad (currently kicking butt in Savage Wolverine) took one of his first unrivalled shots at Spider-Man in Uncanny X-Men #346 in 1997.