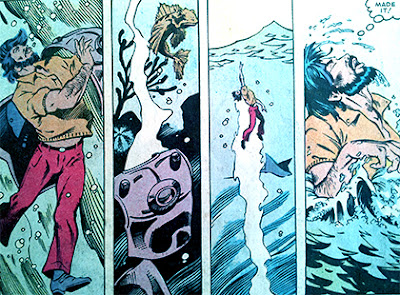 As a kid I was nuts over anything medieval, so it didn't take me long to click on to thinking Iron Man was one of the coolest heroes out. He was a modern day knight of the round table!

While I had previously read of Tony Stark in the likes of Secret Wars and The Avengers, Iron Man #194 was my first issue of the red and gold Avenger's solo title. Opening with Iron Man struggling to lift Godzilla high above the Pacific Ocean, that splash-page meant to a kid like me living in New Zealand, that Iron Man was right on my front door! Sure, the Pacific borders many countries, but why sweat the details? I was sold. A lifetime of addiction to Iron Man had begun. 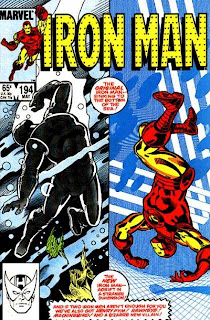 And what a cover to begin with! Iron Man was a cool concept when there was just one of him, now there were two suits of armour? The 'Round Table' was expanding right before my eyes. Plus, look at that logo and corner-box art. If the idea of two Iron Men cast adrift wasn't enough to make my wee hands grab it off the shelves, that riveted Iron Man logo certainly would've! It visually looked as tough as who it represented.

A tale of two halves, part of the book is dedicated to the plight of Tony Stark. Having dropped his reptilian cargo, the industrialist billionaire plummets into the ocean in a powerless Iron Man suit, sinking like a stone. Choosing to jettison the armour to survive, Stark now faces isolation in the midst of a raging storm. In hindsight, man vs nature is an oblivious leveller for the issue, considering this tale is written by Dennis 'Green Lantern/Green Arrow' O'Neil!

Luckily Tony's search and rescue team took the form of West Coast Avengers Hawkeye and Mockingbird. Hawkeye was already another firm favourite of mine at Marvel - he seamed the most down-to-earth hero in comics - and while his search effort isn't all that successful on it's own merits, if anyone could find Tony it would be Clint. 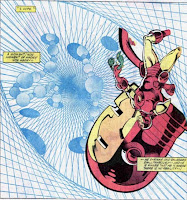 Balancing that reality was the fantastic. In the other tale, former Ant-Man, Hank Pym has tracked down where his mass goes when he shrinks - a new dimension! As James Rhodes comes looking for help regarding his illnesses from wearing the Iron Man armour, so to busts in a hit man looking to made small so he can evade the authorities! Armour illness? Maybe I didn't need one after all!

Rhodey ain't about to have a gun pulled on him and in the resulting battle, Pym and the mugger are pulled into the unknown dimension. Rhodey knows the best hope of finding the duo is to don the Iron Man armour (which he carried around in a suitcase!) and head in after them, guided by a device given to him by Alice Nugent (later the evil Doctor Spectrum), Pym's assistant. However, when the device backfires inside the dimension that often looks like a spirograph pattern gone wrong, the three men literally have to fight their way forward for any chance of making it home.

While subplots featured everyone from Madame Maskque to Obadiah Stane, kudos goes to the pencils of Luke McDonnell in rendering both 'dimensions' of the story. Producing choppy and fluid ocean depths, as well as a limbo without direction, leading to killer panels like this; 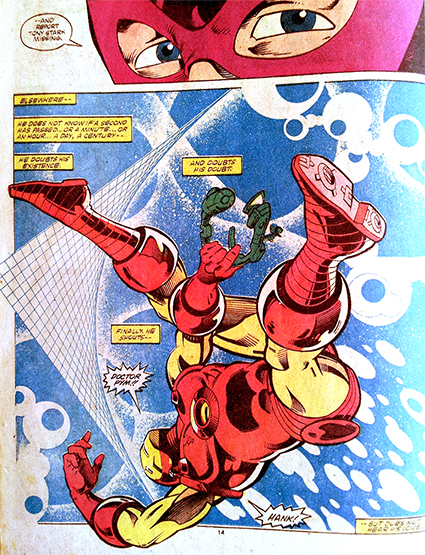 I think Rhodey is what sealed the deal for me becoming an Iron-fan. He wasn't a millionaire or a technological whizz-bang inventor, he was a normal guy (albeit a trained bodyguard) in an Iron Man suit. He did what Dick Grayson did to DC's famous knight, he made it easier to visualise myself as an Iron Man.

While the fabled turn of the millennium (and the decade after that) failed to deliver my own Iron Man suit, let alone a pair of jet boots, a few more people know the name 'Iron Man' by now, so you have to think demand is growing. Now if only we could combine that futuristic wish with maintaining the $1.70 (NZD) price-tag that I brought this comic for back in the day, I'd be one happy little shell-head.

What do you think?  What was your first Iron Man memory/comic?
Posted by IADW at 8:03 am